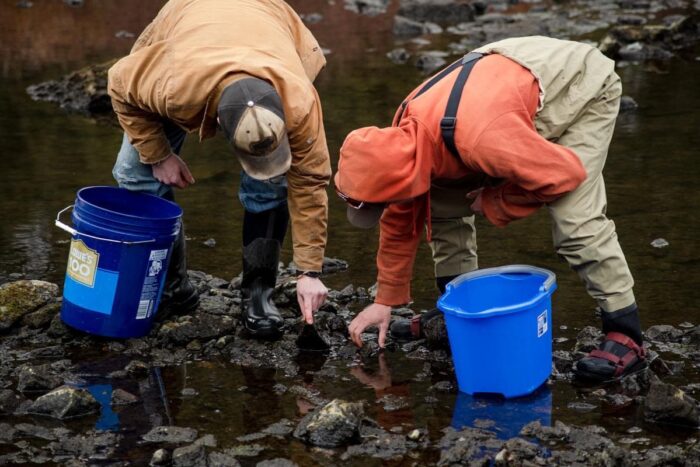 Just when you thought the Madison River challenges could not get worse, it seems that they have! Kelly Galloup’s Slide Inn continues to report on a water issue with the river. The Slide Inn website has current information available. The river has dropped substantially but is back on the rise. The upper Madison from the Hegben Dam downstream to Ennis Lake was seriously dewatered but is currently being restored. Flows went from over 950 CFS down to 177 CFS Tuesday night.  

For some reason, the Hegben Lake Dam outflow gates failed. The damage is below the Hegben Lake waterline and requires divers to fix the problem. Northwest Energy is first trying to control and restore the water flow to hopefully salvage the fishery. The gate that failed is only a few years old and they do not yet know why it failed.

Boatloads of fishermen and volunteers could be seen netting fish in the puddles and dewatered side channels. Rods were left in their trucks and replaced with nets and buckets. Once netted and in buckets, the fish were released back into the mainstem. Raptors and other predators were also on the scene doing what they do. Areas containing redds, fish egg nests, were damp but not under water. Freezing temperatures surely caused damage along with volunteer foot traffic. Like it or not, a significant decline in the fish population and spawn will impact the river fishery. This year’s spawn will be a bust and the total fish population will take years to restore.   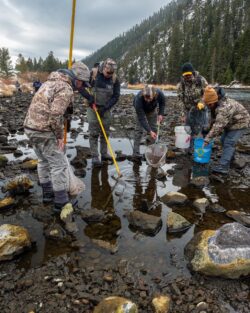 In 2008, the Hegben Dam had 2 lower gates fail, causing spring runoff conditions. Hegben Lake dewatered over 5 feet in depth before flow control was restored. It took nearly 10 years to repair the damage. The dam repairs were only completed and resolved recently. Routine Dam Drills were implemented in case the dam were to fail catastrophically. This dam, originally constructed in 1914, is just upstream from Quake Lake, which was formed when a large earthquake struck the area in the 1950’s. The Hegben Dam was severely damaged during the earthquake but did not fail. The Hegben Dam is in NO danger of failing at this time.

Northwest energy, who manages the dam, and the MTFWP are continuing to monitor this crisis and plan to have the dam gates fixed by Friday. Flows have been restored and the Kirby Station, at West Fork bridge is beginning to show an increase in water. It takes 6 hours for the water from the Hegben Dam to reach the Slide Inn. Flows to Ennis Lake will take much longer to return to normal.

What is most interesting is how this crisis and fish kill will impact future Madison River fishery management. There is an opportunity to implement major changes and improvements to this Blue-Ribbon Trout fishery. Hopefully the MTFWP, and NW Energy Co. are aware of the need to make changes and take advantage of this opportunity.