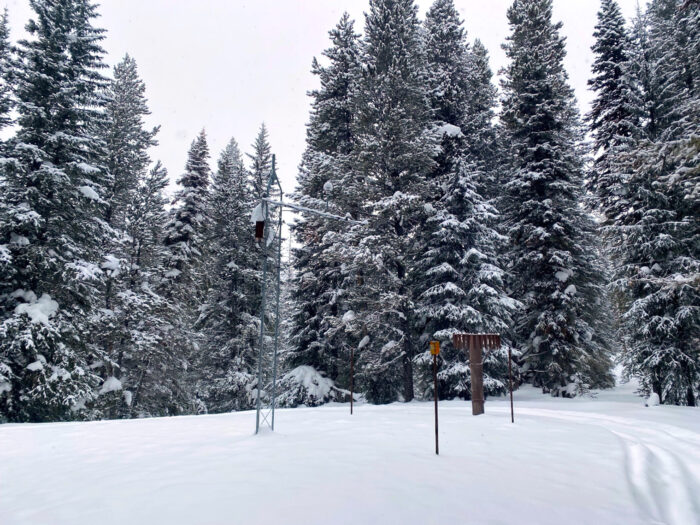 BOZEMAN, Montana., February 4, 2022 – On the heels of a December which brought exceptional moisture to the Treasure State, January largely lacked needed precipitation. Monthly Natural Resources Conservation Service (NRCS) SNOTEL site totals across Montana show that January precipitation was below to near normal. “The first week of the month looked promising. The mountains received at least one to two feet of snow, but westerly flow brought high pressure during the last three weeks in January,” said NRCS Hydrologist Eric Larson. This made for clear skies, warmer than normal temperatures, and below normal precipitation in most river basins. Exceptions were the northern Whitefish Range and Little Belt Mountains, which received snow near the end of January.

“The good news is, the snow we received during the first week of January really cushioned the snowpack for the later portion of the month,” said Larson. Overall, the current snowpack as a percent of normal is down slightly since Jan. 1, but significantly better than it was on Dec. 1. Several river basins did see small increases in percentages, but it was mostly due to the snow received early in the month. In general, the snowpack west of the continental divide is better than it is east of the divide. As of Feb. 1, all major basins have a below normal snowpack except for the Lower Clark Fork, Kootenai, and St. Mary’s River basins.

Even though the La Niña weather pattern circulation is likely to continue for a few more months, the National Oceanic and Atmospheric Administration (NOAA) Climate Prediction Center outlooks are not particularly promising for Montana. The one-month outlook gives an elevated chance of above normal precipitation across most of the state, but as we found out in January that is not a guarantee. With two-three months remaining in the typical snow accumulation season there is still time to make up for deficits. “Most locations are still only one large storm short of a normal snowpack,” said Larson. Normal to above normal snowfall over the next several months will be necessary to reach normal snowpack peak levels in April and May.

A full report of conditions on Feb. 1 can be found in the monthly Water Supply Outlook Report available on the Montana Snow Survey website. In addition, real-time snow survey data can be found at www.mt.nrcs.usda.gov under Snow Survey.