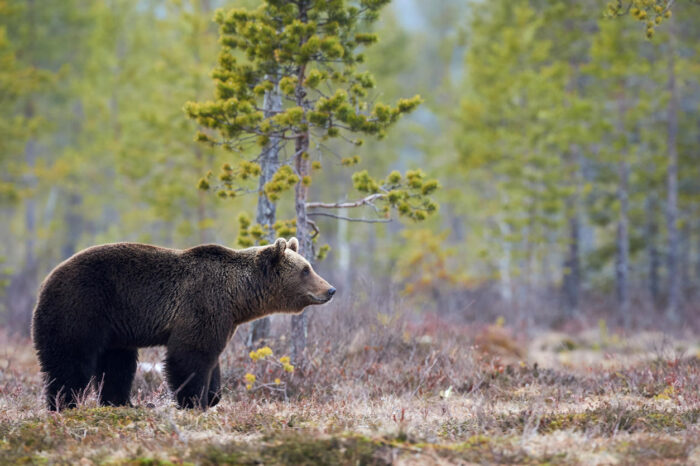 The GALLAVANTING GRIZZLY!!!
By Montana Grant

Ethyl the Sow Grizzly bear has had an interesting life in Big Sky Country. Her love of apples facilitated her 2010 capture in an apple orchard near Lake Blaine, Montana.

Ethyl was relocated away from the apple magnets and set free into the distant wilds of Montana. The move may have been unbearable, but she was given another chance.

Two years later, Ethyl showed up back at the apple orchard with her cub. Catch me once shame on you, catch me twice, shame on me. Ethyl was tranquilized and given a full physical and survey. Ethyl was also fitted with a satellite collar necklace! The things a girl will do for some jewelry. 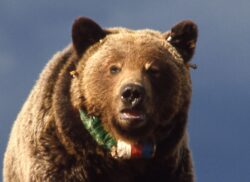 Anyway, Ethyl was again relocated further away into Puzzle Creek drainage near the Marias Pass, along the Continental Divide. Ethyl was still not happy and trekked toward the Bob Marshall area, then down to Coeur d’Alene, where she hibernated for the winter of 2013-14.

Upon awakening, Ethyl then harried down I-90 East toward Missoula in the Fall. Next it was back through the Bob Marshall Wilderness and into Glacier Park. Her next hibernation was around Eureka. It was here that Ethyl lost her Satellite collar.

At this point in 2014, Ethyl was 24 years old and had been tracked for over 2,800 miles! This does not count her mileage before the collar or after. If the average annual, 700 miles per year mileage, Ethyl may have traveled over 25,000 miles in her life.

Grizzly Bears and Wolves are complicated critters. They both are important to the wellness and health of our ecosystems. They area also dangerous to humans and livestock. Currently wolves are hunted again in the lower 48 states. Grizzly bears are still under Federal protection, even though they have exceeded population management goals.

The Yellowstone Region is ground zero for both Grizz and wolves. The truth is in the trek. These critters move and can end up anywhere along the Rocky Mountain Front.

I wonder if Ethyl was carrying a Travelocity gnome as she has vacationed Big Sky Country.