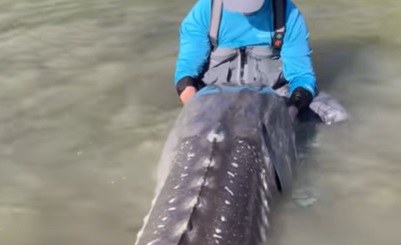 If you forgot how big sturgeon, aka dinosaur fish, are, then you will definitely want to take a look at this footage.  Wow!

A fishing guide caught and tagged a roughly 10-foot-long sturgeon on the Fraser River in Chilliwack, British Columbia, on March 6, before releasing the massive fish back into the river.

Yves Bisson, owner of Yves Bisson Sturgeon Co., told Storyful that when he saw the giant sturgeon jump out of the water, he immediately knew the sighting was rare. “I have landed over 22,000 sturgeon on my fishing charters and this was one I’ll never forget,” he said. Bisson estimates that the fish was close to 100 years old and most likely weighed about 600 pounds. “We were all amazed as this fish had no tag and had probably never been caught before,” he said.

Bisson told Storyful he regularly scans and tags sturgeon as part of a conservation program to collect data about the fish.