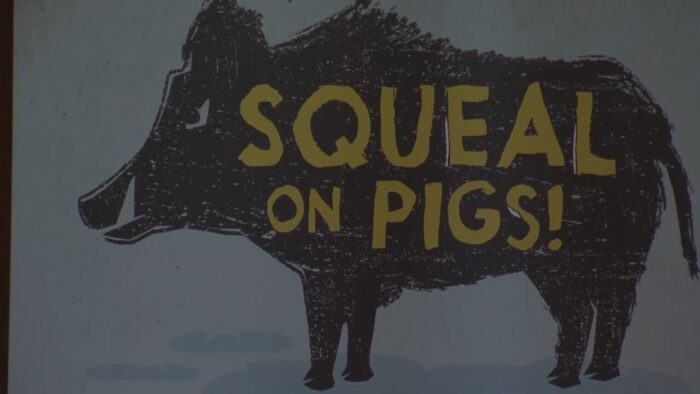 PIG OUT!!!
By Montana Grant

Feral hogs are beginning to invade Big Sky Country. Sightings have been made along the Hi-Line of hogs invading from Canada. These invasive critters create both environmental and commercial damage. Their impact is also a health concern.

37 states and 4 Canadian provinces currently have infestations of feral hogs. Domestic hogs have their teeth trimmed when young to prevent tusks. Feral pigs use their tusks to plow up fields and damage critters. They feed on crops, fawns, calves, eggs and nests, and anything that they can find. They damage irrigation, fencing, and watersheds.

The first pigs came from Europe. The Spanish explorer DeSoto introduced them into Florida in 1539. The hogs in Canada are a Eurasian strain that were being farmed for the exotic meat market. They were established in the 1980’s. Of course, they escaped and are now on the loose.

Feral hogs have become a business for hunting outfitters in many states. One case in Montana was when some Texas landowners stocked their Montana ranch with captured feral hogs from Texas. They released them onto their property. Once this information was discovered, the MTFWP exterminated the pigs. Outfitters and private landowners claim that they have the right to do what they want on their land, but no fence seems to prevent hogs from roaming.  

Diseases are a huge concern. 6-8% of feral hogs carry Brucellosis, 18% carry rabies, while others carry foot and mouth disease, cholera, anthrax, worms and parasites, tuberculosis, and flukes. The bacterium in their defecation is full of e coli and other diseases.

Some areas have had success in eradicating hogs, but they seem to find aa way to return, often by illegal restocking. Idaho, southern Saskatchewan, Maryland, New Jersey, and New York have been successful. Judas hogs, equipped with trackers are used to locate herds. Birth control drugs have also been deployed along with snipers, and poisons.

Hunting wild hogs helps control herds. Traps also have had success, but hogs learn to dig under and climb fencing. Pigs can run 30 mph and are fast learners. They breed and disperse rapidly. Most wild pigs are black but can also come in a variety of colors. Over 5 million feral hogs are estimated to be on the loose in North America.   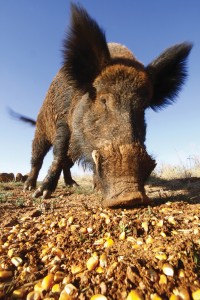 The Montana Fish Wildlife and Parks has started a new program called “Squeal on the Pigs”. Farmers and the public are asked to report any sightings within 24 hours. Call 406-444-2976 to report any info that you may have. Cell phone pictures or other specifics location information are helpful.

Education is key. Any human introductions of feral hogs are against the law!