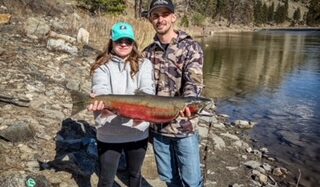 The first hatchery steelhead of the spring was trapped at the Pahsimeroi Hatchery on Thursday, March 10th, and no steelhead have been trapped at the Sawtooth Hatchery. Additionally, we would like to continue to inform anglers that the Idaho Fish and Game Commission changed the steelhead daily bag limit for the spring 2022 steelhead season on the Salmon, Little Salmon, and Snake rivers to 2 fish per day, 6 in possession. These changes went into effect on January 1 and only apply to the to the 2022 spring steelhead season.