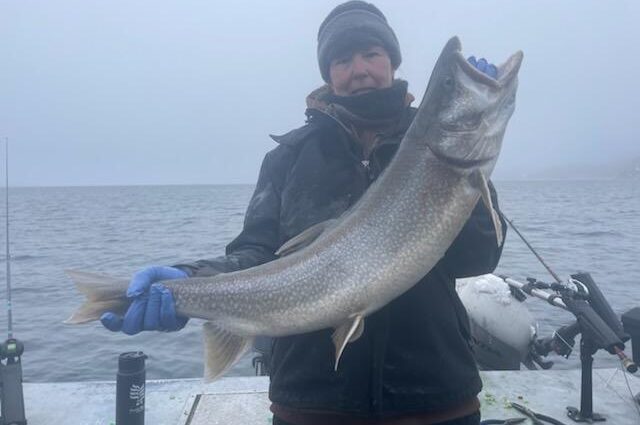 What a week of grueling fishing for weary Mack Days anglers on Flathead Lake. Ole man winter just isn’t giving up and they felt the effects out on the lake. Monday through Thursday fishing netted 4 lake trout that were caught by sheer determination. Bitter winds along with cold temps kept most anglers home, walking the shore, sitting in vehicles hoping for a let up in wind, or in campers playing cribbage.

Friday fishing was the best of the entire week, temperatures were better and the wind died down in the afternoon, with 615 lake trout entered. Saturday’s winds were stronger on the south half of the lake with anglers going out but having to turn around and come back in with iced up anchor systems and frozen reels. One angler said “the boat looked like one from a show on TV from up north with the boat ice covered all over.”  The north end anglers were able to find areas to spend time fishing without being tossed around too much-still rough but doable. Batteries on the anchor systems fade fast when it is rough on the water and once your batteries can’t hold the boat it is time to come in which is what has happened several times this past weekend.  A total of 247 lake trout were brought in on Saturday.

Sunday the south end of the lake was fishable and the north end was hampered by wind and waves. Sundays total came to 288 lake trout entries.  The last entries came in at 8:45pm, from anglers who go out at the break of day.  These anglers who fish Mack Days are a hardy tough group of men and women who love to fish and are helping with the goal of increasing numbers of native fish in the lake.

2022 Spring Mack Days are sponsored by the Confederated Salish and Kootenai Tribes and are used as a tool to reduce non-native lake trout in Flathead Lake. There is Up to $225,000 in Cash and Prizes that will be awarded at the conclusion of the event which is May 15th.

The $10,000 tagged lake trout-aka “The Captain” is still waiting for just the right lure.  The $10,000 lake trout could be yours. There are also (3) $5,000 and (5) $1,000 plus one $1,000 sponsored Bretz RV and Marine tagged lake trout. Tagging of the lake trout began in 2007. The tags are still readable and are still valuable to anglers. There are over 9,000 tagged lake trout with values from $100 to $500. The high dollar lake trout from past events get revalued to $100-$500 values and new high dollar tags are implanted in new fish. Data about the tagged fish is used by biologists. They are measured when tagged and when they are turned in. They move around and locations when tagged and when caught are also used. There were no tagged fish turned in over the week.

Julie Perkins of Kalispell is leading the Ladies Category with 126 entries. Julie caught a large lake trout Friday, which was the only fish that cold, windy day for her. It gave her a good fight in really, really, rough waters. After finally getting it in the boat she measured and it was over 36” but did not weigh enough to place as the largest lake trout. She released the big fish back into the waters. Connie Jones of Kalispell has 64 entries, Rebecca Spring of Alberton has 18, Ia Thao of Missoula has 11, and Amanda Hoback of Arlee has 5 lake trout entries.

Anglers begin to get bonus dollars once they have eleven fish entries. The amount goes up every 25 fish as your total goes up.

The second day of the three-Bucket of Fish Days was Saturday. The Demmon’s boat of Missoula with Chris and Jennifer along with Clint Arneson of Lolo and Chad Berg of Stevensville turned in a 25.6 pound bucket of four lake trout under 30”. Bob and Kolton Turner were second with 16.9, 3rd Clint Speer and Gene Corne with 11.25, Steve Benson was 4th with 9.2, and 5th was Andy Reed with 8.85. The 3rd and last day of the Bucket Days is May 1st.

Entries continue to be taken until the last day of the event. There is no entry fee. Every fish qualifies anglers for the lottery drawings that begin at $2,000. Check out the categories, rules, and bonus chart at www.mackdays.com or call Cindy Benson @ (406) 270-3386.