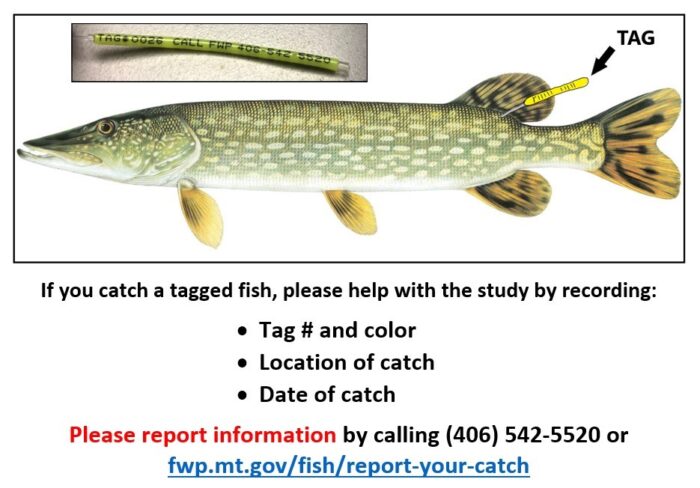 MISSOULA — Montana Fish, Wildlife & Parks fisheries biologists began tagging northern pike in portions of the Bitterroot, Clark Fork, and Clearwater rivers this week as part of a new study on pike movement in the Missoula area. The success of the study depends on reports from anglers who catch tagged fish.

Biologists believe the research will help identify movement patterns and extent, as well as identify key breeding areas in local watersheds. In recent years, biologists have observed greater numbers of pike in rivers within the study area and consistent production of larger pike. While valued by many anglers, northern pike are also an introduced species that can impact wild trout populations and other species through predation and competition.

Angler reports of tagged fish are critical to the research. FWP fisheries crews will be netting and tagging northern pike over the next few months in several areas on the Bitterroot, Clark Fork, and Clearwater rivers where the fish are known to be concentrated.  Floy tags are inserted near the dorsal fin and are color-coded with a unique number.

The tags include a phone number (406-542-5520) for anglers to call when the fish are caught.  Information can also be reported online at fwp.mt.gov/fish/report-your-catch.  Anglers are asked to report the tag number, color, location and date of the catch. Anglers reporting tagged fish will get information on their fish’s movements from FWP and will be entered in a prize drawing at the end of the summer.

Biologists plan to tag fish from early April through May and always appreciate recapture information from anglers. Research results will provide a better understanding of pike numbers, movement, and distribution to inform management of local fisheries.