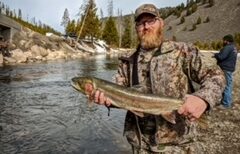 River conditions upstream of the East Fork were good throughout the week with clear to slightly cloudy visibility and water temperatures in the low to mid-40s. Downstream of the East Fork, the river had cloudy visibility and water temperatures ranged from the mid-40s near Challis, ID to the low 50s downstream of North Fork. Currently, the Salmon River is flowing at 1,340 cfs through the town of Salmon, ID which is 103% of average for today’s date.

As of Monday, April 4th, the Pahsimeroi Hatchery has trapped 1,134 adipose-clipped steelhead, and as of Thursday, March 31st  the Sawtooth Hatchery has trapped 361 adipose-clipped steelhead. Steelhead at the Sawtooth Hatchery will be available to the public on Mondays and Thursdays, on a first-come, first-served basis until spawning is complete for the year. The public can pick up a numbered tag at the hatchery’s spawning facility between 8 a.m. and 2 p.m., with steelhead to be given away at 2 p.m.  For more details, visit Sawtooth Hatchery’s Facebook page at https://www.facebook.com/sawtooth.hatchery or call 208-774-3684 for a recording of the give-away process. Additionally, any anglers that would like more information about the Pahsimeroi Hatchery are encouraged to call 208-876-4475 to listen to a voice message that is updated weekly by the Pahsimeroi Hatchery manager to provide the public with information regarding trap numbers and steelhead carcass distribution to local charities.