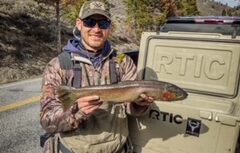 River conditions upstream of the East Fork remained good all week with clear visibility and water temperatures in low to mid-40s. Downstream of the East Fork, river conditions slowly improved throughout the week as cooler weather moved into the area, and on Sunday, the river near Challis, ID had slightly cloudy visibility with water temperatures in the mid-40s. Currently, the Salmon River is flowing at 1,350 cfs through the town of Salmon, ID which is 91% of average for today’s date.

As of Monday, April 11th, the Pahsimeroi Hatchery has trapped 1,514 adipose-clipped steelhead, and the Sawtooth Hatchery has trapped 1,046 adipose-clipped steelhead. Steelhead at the Sawtooth Hatchery will be available to the public on Mondays and Thursdays, on a first-come, first-served basis until spawning is complete for the year. The public can pick up a numbered tag at the hatchery’s spawning facility between 8 a.m. and 2 p.m., with steelhead to be given away at 2 p.m.  For more details, visit Sawtooth Hatchery’s Facebook page at https://www.facebook.com/sawtooth.hatchery or call 208-774-3684 for a recording of the give-away process. Additionally, any anglers that would like more information about the Pahsimeroi Hatchery are encouraged to call 208-876-4475 to listen to a voice message that is updated weekly by the Pahsimeroi Hatchery manager to provide the public with information regarding trap numbers and steelhead carcass distribution to local charities.