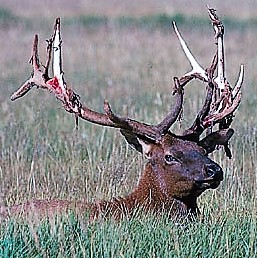 Elk are Montana’s premier Big Game Critter. Every hunter’s dream is to tag a big antlered bull. Thanks to hunting groups and smart management elk are thriving in Montana. The problem is where they are thriving. Currently elk populations in Montana are 50,000 critters over the management plan and growing.

Private land is home to many prime herds of elk. This means that there is only limited or no hunting access. Outfitters are now leasing enormous tracts of land which targets antlered bulls for high dollar hunters. Cows may only be tagged on the last day of an expensive hunt.   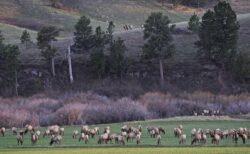 When the winter sets in, elk migrate down along lower watersheds and pastures. These areas are mainly owner by private landowners that refuse access or exploit even more bulls for $1,000 an antler tine. Elk will herd up on these inaccessible lands by the hundreds. When elk pile up on private pastures, they damage fencing, stream banks, and feast on grass, hay, and crops. It is when this happens that landowners get angry and treat elk as if they were locusts.

Elk, deer, and wild animals belong to all citizens of Montana, or they are supposed to be. About half of Montana state owned public land is not accessible to hunters. Private land blocks access. The surrounding landowners get to enjoy and use the land at the expense of the public taxes and management. Once wild critters end up on private, prime land, hunters are no longer able to hunt them.   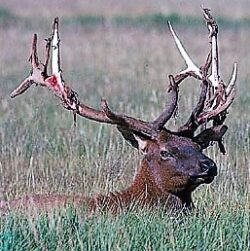 In April, a group called United Property Owners of Montana filed a lawsuit against the MTFWP. This lawsuit says that the state is in violation of the elk management goals. There are too many elk and the FWP needs to meet the objectives. They landowner group wants these surplus animals eliminated by any and all means at once.

Two other laws are also being targeted. The first delegates wildlife control power to the State Commission. The second law requires public access as a condition of allowing game damage hunts. The United Property owners group wants both laws overturned.
Other local groups are fighting back. Montana Wildlife Federation, Montana Bowhunters, and others routinely engage in making management policy.

The lawsuit is seeking private control over elk on private land. Landowners can sell wild game, give licenses to non-residents, outfit, or handle the elk in any way they want. If the wildlife is on their land, it is their responsibility to manage them since the elk are trespassing on their land!

Brucellosis is another concern. It turns out that current wild Buffalo can spread this disease to domestic cattle. In truth, elk are a far more dangerous vector for Brucellosis. If this were to become a concern, elk would need to be eliminated to protect cattle. If private landowners with cattle get their way, this could become the plan.

Honestly, this change in regs is confusing, unwarranted, and selfish. My conclusion is that wealthy landowners want to manage their own game herds, allow outfitters to rule, give out hunting licenses at their choice, make money off public wildlife, and lock up their private lands. Maybe I am wrong, but it seems like greed and selfishness are at play.

I hope that I am wrong. Over half of our state lands are landlocked by these same landowners. Fence corner jumping is not allowed. The wealthy landowner gets to use and hunt public managed land without allowing access for public hunters. If the elk spread disease to their cattle, watch how fast elk become varmints and are shot on site, year around.