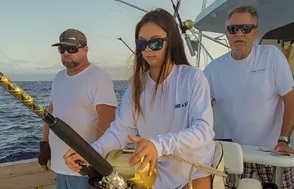 They traveled more than 4,000 miles to do it, but they got their fish – a pending world record blue marlin.

Around the end of May, Jonathan Arn and his 12-year-old daughter Elizabeth of Panama City Beach chartered the Dacia, a 43-foot G&S Boat captained by Destin’s Randy Baker, at Cape Verde off of Africa with full intentions of catching a world record blue marlin.

And on May 31, it was mission accomplished as the 5-foot young girl reeled in a 624-pound blue marlin.

Along for the trip in addition to the Arns were first mate Stephen Hall of North Carolina, second mate Chase Travers of Virginia and Capt. Scott Murie of Destin, who served as gaff man.

Read the full article in The Destin Log by Tina Harbuck here.