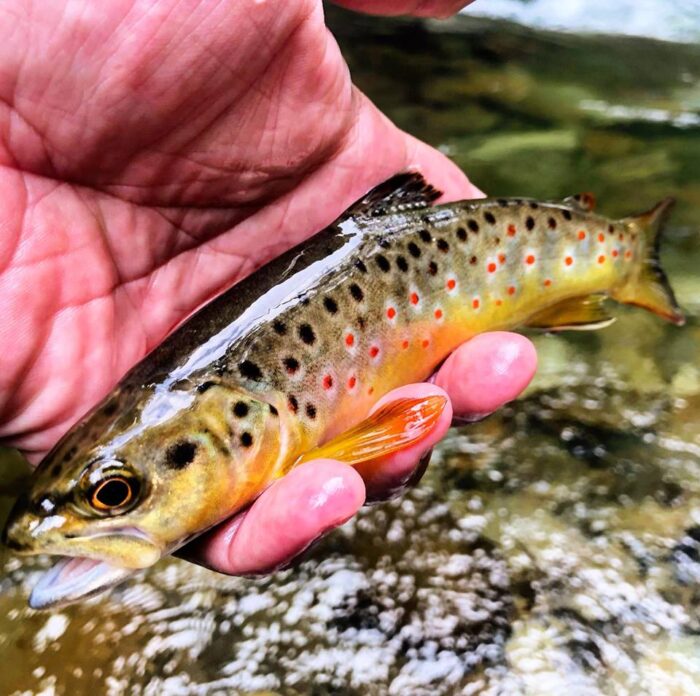 Back in the day, native warriors would Count Coup against their enemies. They often carried a Coup stick decorated with relics and symbols about their coups. The Coup, meaning “to strike”, had to be witnessed by the other warriors. It was braver to Count Coup than to kill their enemy. The Brave’s goal was to win and show prestige without bloodshed.

Today, fishermen Count Coup when Catching and Releasing fish. A proper and quick battle, a wet handed / net capture, a quick disconnect and a gentle release. The trout can live for another day. A study in Idaho said that the average trout fisherman catches and releases a fish in less than 26 seconds. Any time faster than 30 seconds will not cause substantial mortality, unless the fish is squeezed, dropped, bleeding, or mishandled. Every second counts.   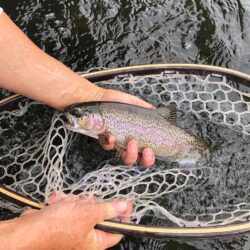 Many fly-fishing purists curse bait fishermen, killing a fish, or abusing fish. Sadly, many of these same anglers are responsible for too many dead fish that are released improperly. It seems that the most recent way fly guys Count Coup is to show pictures of their daily catch. They then post their several catches to brag about the day. 3 inches or 3 lbs., it is coup caught fish. Sure, the fish are released but, how fast can they catch the fish, whip out their cell phone camera, say cheese, and take a Camera Coup picture?

It takes a healthy trout 3-4 minutes to suffocate, out of water. That’s about the same as most humans. This time does not factor in other factors that cause and accelerate mortality. Cell phone cameras kill more fish than bait fishermen.

It’s rarely not just one thing that kills a trout or fish out of water. Here are several issues that accelerate mortality.

TEMPERATURE    Trout thrive between 35 and 65 degrees. Once it gets warmer, mortality becomes more of a concern. All fish are more stressed in warmer conditions. Cold water saves fish lives!

LENGTH OF BATTLE     The longer you fight a fish, the higher the risk of mortality. Over 5 minutes is way to long for most trout and warmwater fish. Saltwater fish can fight and survive longer battles. Try to play and land your fish in less than 3 minutes. Use premium leader/line, a disc drag, or smooth drag, a longer rod, and a net. Teamwork helps to reduce Battle time. The longer a fish fights, the more lactic acid builds up in their muscles. They may swim away but may not feed for weeks after.

STRESS    The catching, fighting, netting, and handling of fish is a frightening event for the fish. Imagine if you were the fish. No one ever tells the fish they are going to be released. They are fighting for their lives when a huge net, hand, or human snatches them out of the water. Big fish can have heart attacks when caught. Now they get a death grip, fumbled, dropped, rolled in the dirt or rocks, and must pose for a cell phone selfie! I would be pretty stressed out too.

WET    Did you wet the net and your hands before touching the fish? Any dry rag, net, or skin will remove mucous from the fish. Mucous protects the fish from bacterial infections. They may swim away but die when killed by fungus and infections later. Keep the fish wet!   BRITE LIGHT    Sunlight can quickly impact a fish. Fishermen are sure to wear lotion, polaroid glasses, big brim hats, long sleeve shirts, and face coverings. Maybe we need to consider how sunlight impacts the fish. Their fisheyes can’t adjust as fast as ours. When they are released, they may be blinded. This means that predators, excited by the battle, may have an advantage. Marlin, that fight their hearts out, get pulled out of the water, pose for pictures in the bright sun, and then released, are often killed by lurking sharks. Eagles, bigger fish, and other environmental hazards for rough water can also harm released fish.

GRIP N GRIN    If you must capture a picture, keep the fish in a wet net and in the water. Hold the net and not the fish. Be creative with your pictures but not at the expense of the fish. I once watched a Camera Coups angler throwing the fish repeatedly into the air to take action photos. A death grip is common for inexperienced anglers. They are so afraid to lose the fish that they squeeze the fish and crush organs and air bladders. The fish is also often dropped into the boat, rocks, sand, and grass. This bruises the fish and increases mortality. Fishermen say, oh, the fish swam away and that is supposed to make it ok! But the damage is done.

KILL THE FISH    If you plan to eat the fish, thunk it in the head and end its suffering. Now you can pose and take Camera Coups all day long. When you are done, put the fish on ice and prepare it for dinner. I love to eat fish. A properly thunked fish tastes better than a fish from the live well or off a stringer. If you deploy a gaff, the fish goes into the cooler.

ARE WE MAKING TOO BIG OF A DEAL ABOUT FISH SURVIVAL?     Fishing, like hunting, is a Blood Sport. The difference is that you can’t Count Camera Coup on a 10-point Buck. After a lifetime of fish pictures, all fish look the same. The friends and places are more important than the fish. WE will never catch enough fish. Our pictures are fun but how many more fish could you catch if you weren’t wasting time taking Camera Coup?

NUMBERS    Many anglers have become obsessed with How Many Coups they can catch. They don’t eat fish but love the bragging rights. They hire guides to boost numbers. Tips are based on netted Coups. Lots of Grip n Grin cell phone pictures seal the deal. Before the day is over, pictures are emailed around the world. “Look at me with this fish!” It’s getting out of hand!

So, what can we do to save fish lives? Education is key. Guides, Charter Captains must teach proper Catch and Release. Catch Limits may become a reality. This means that each angler can catch a limited number of fish. 100 fish daydreams may need to stay dreams. The truth is that even with perfect skills, the more fish you catch, the higher the mortality will be.

Fishermen do not need to take a picture of every fish they catch. No one will remember most of the pictures but the angler. The memory is better than a stressed-out fish floating in a net, Gripped, or squeezed for a smile, of flopped and floundered into the dirt. Bragging rights are not as important as being an ethical angler.

Fish cooler waters, fightem fast, handle and net gently, and release quickly. You don’t need a selfie of every fish you catch, unless you are a crappy fisherman.

Oh, and save the Fish, Kiss for your wife, girlfriend, or fishing buddy!