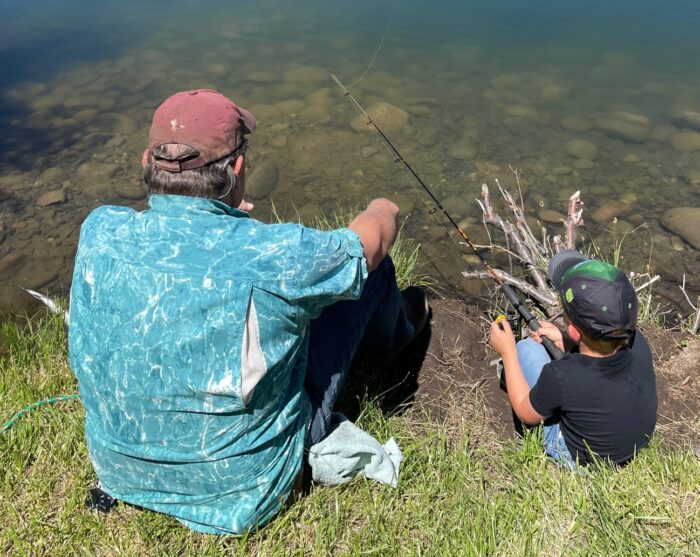 FISHING WITH GG!!!
By Montana Grant

My grandson is named Clyde Carey, so I call him CC. Grandpa Grant is my name and he calls me GG. Of course, I am also known as Montana Grant. We recently hit the water for a fun fishing day with CC’s Momma. Jessie once caught fish in the same pond. Now the cycle continues.

The Ennis Pond is kid only fishing pond. Kids can catch and keep 3 stocked rainbows. The trout come from the Ennis Trout Hatchery. A fishing derby took place on Father’s Day so there were plenty of fish a week later. The water was cool, clear, and dappled with rising trout. These trout can be caught and released but hey are also tasty and healthy to eat. Several of the trout we hooked, or saw were up to 25 inches long. 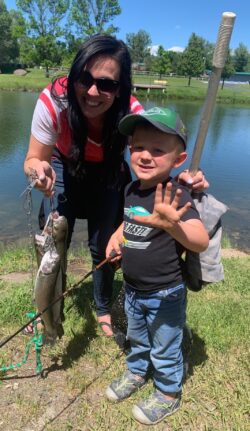 There were other kids and their parents trying their best to catch a fish. Family fishing is so much fun and creates wonderful memories. Adults can help cast but the rest of the deal belongs to the kids. They need to learn how to set the hook, reel in, hold the rod up, and hang on.

Some of the trout seemed so big that I joked about tying a rope around CC and hooking him up to a tree. Getting dragged into the pond would leave a lifelong fear of fishing! The first several trout hit and spit. CC was just too slow on the hook set. After a thousand hooks, the trout were no dummies.

Finally, I went to finer tippet and mixed up the baits. The trout knew what corn was and would not hold onto it. Spinners were also avoided. Worms were interesting but quickly bit and spit. We finally made a bait combo using corn and worms on a small #12 super sharp hook.

Grandpas, Mommas, and kids get excited when fishing. It was time to sit down and take it easy. The catching needed to be done by the grandson and not the adults. Catching fish is one thing but if you think that you are the Fishing Master, try and get a kid to catch. Our jobs were to set up the grandson for success and net the catch.

The bite was on! Fish were fighting, pulling, jumping, and the reels drag was screaming! Momma was the net queen and GG held onto CC. We caught and released several frisky trout and kept 3 for the pan. Everyone else was closing in on our spot. CC even let another little boy reel one in. Sharing is important when fishing.

The biggest rainbow was 23 inches long. I placed the huge trout onto a piece of cardboard and had CC trace the fish. Later I will jig saw the fish shape out of some wood. These wood trophies will get decorated and hung from a stringer in CC’s bedroom.

After a hard day of fishing, treats and rewards are needed. The Ennis Pharmacy was ready to whip up some milk shakes. CC got a Coconut ice cream shake and sucked it dry! My strawberry shake was also pretty tasty.   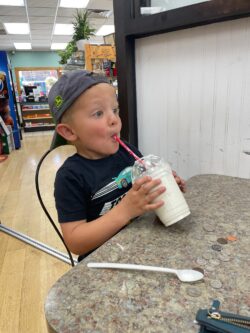 Once we got home, it was time to filet the catch. Biology class was in session. We learned the fish parts, cut open the stomachs, examined the gills and teeth. There is so much to learn. Later these filets will be what’s for Dinner and CC will be proud, fat, and happy.   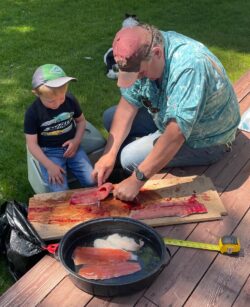 Every trouting adventure gets easier. This was CC’s second fishing trip with GG. He is figuring it out. Setting the hook, reeling, and fighting the fish are improving with every new hook up. Not bad for 3-year-old! After a couple hours it was time to leave and CC is already bragging about his catch, GG, Momma, and when we can go again.

Tight lines and screaming reels, and Grandkids are the Best!