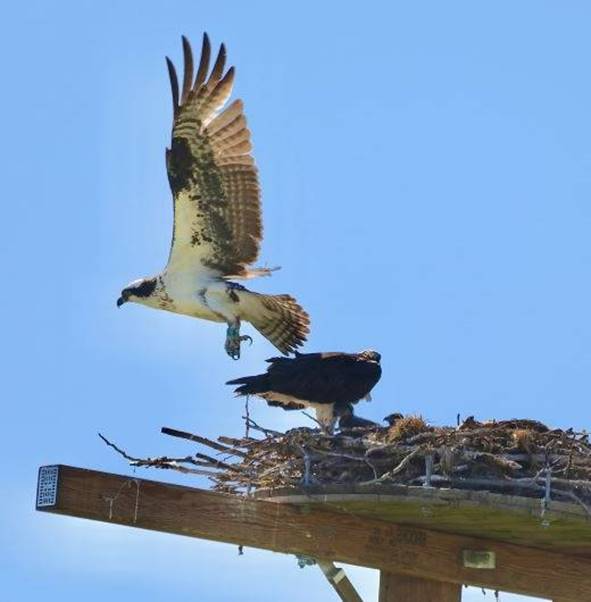 Butte, Mont. – July 5, 2022 – The move in early May of an osprey nest built on an energized power pole to a safe location on a nest platform in Gallatin Gateway is a success. Two chicks hatched from the eggs were spotted being brooded and fed in late June.

Each spring NorthWestern Energy line crews contend with ospreys trying to build nests on energized poles, conditions which present a fire hazard and electrocution risk to the birds. Bozeman NorthWestern Energy crews had knocked off nest sticks from a power pole several times over a few weeks near Gallatin Gateway. The osprey pair persisted and eventually one day a lineman found a nest containing two eggs.

“We received permission from the U.S. Fish and Wildlife Service to try to relocate the nest with eggs instead of destroying it,” NorthWestern Energy Biologist Marco Restani said. “There was a risk that the adults would abandon the relocated nest and we didn’t know if the eggs would hatch after they were moved.”

The chance of success was probably 50% at best, Restani told the crew members.

“It takes osprey eggs a little over a month to hatch and everyone involved has been waiting for the outcome,” he said. “This is the news we were hoping for.”

Moving day in early May was snowy and 27 degrees. NorthWestern Energy crews first erected a pole with a nest platform nearby after receiving permission from the landowner. Line crews then reached the nest on the energized pole with a bucket truck and the female osprey flew away, keeping an eye on their activity. The two eggs were carefully moved to the electric supervisor’s running vehicle to stay warm, while crews moved the nest from the energized pole onto the nest platform. Once the nest was arranged onto the platform, the eggs were retrieved and placed into the nest.

In less than half an hour the female osprey was incubating her eggs on the new nest platform.

“The line crew worked quickly without hurry in an extremely safe and well-choreographed manner to get the nest and eggs relocated,” wrote Montana State University Affiliate Research Professor Al Harmata in an email, who was on site to observe the move. “Flat-out Amazing!”

A pair of osprey and their chicks were photographed by Holly Pippel in a nest  relocated to a new platform by NorthWestern Energy crews in May. Holly Pippel photo

In early June Holly Pippel sent Restani a photo of the male bird’s banded leg, clear enough to confirm that he had banded the bird as a nestling in July 2018 just north of Pray in Paradise Valley. Pippel, a wildlife photographer, also sent him the first photos of the chicks.

“We’ve received a lot of phone calls, pictures and texts thanking us for giving them a safe, new home,” Benn said. “We are all happy to see this success, especially given the challenges. We are looking forward to continuing to watch these two new babies call our platform home.”