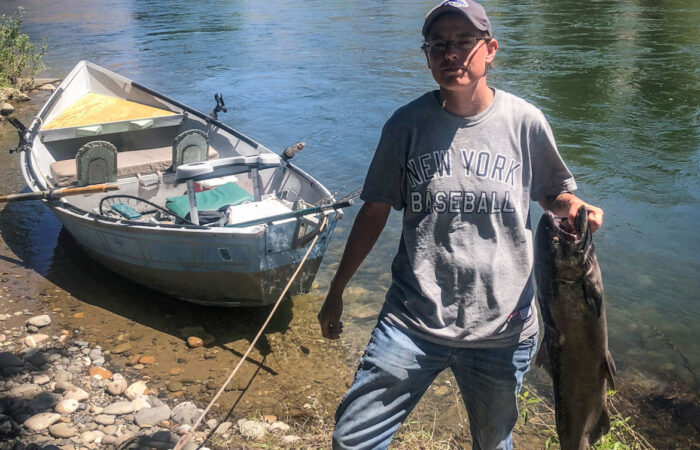 Hi everyone, below is the weekly upper Salmon River Chinook update:

To date we’ve harvested an estimated 437 adult hatchery Chinook from the Sawtooth return, which is still under our harvest share of nearly 700 fish. With the recent decrease in angler effort, it’s likely we won’t reach our harvest share by the end of this weekend, so we’ll likely be able to keep this portion of the fishery open until at least into early of next week.

Similar to previous weeks, harvest has been minimal downstream of the Pahsmieroi. To date, we’ve harvested 67 adult hatchery Chinook downstream of the Pahsimeroi, which is well short of our 600 fish harvest share.  It is likely that this section of the fishery will remain open into the first week of August.

The Pahsimeroi hatchery has trapped 1,004 hatchery adult Chinook through 7/22.

For the most up to date hatchery trapping numbers, check IDFG’s Hatchery Returns webpage.

Hatchery staff at both facilities will continue to recycle Chinook into the fishery as they are available.

From here on out, I expect catch rates and angler effort to remain similar, with jacks comprising the majority of the catch.

As always, keep an eye on the Chinook Salmon Seasons and Rules webpage for details on the current seasons and rules information, as things can change quickly.

As I mentioned in last weeks’ update, there’s a new wildfire burning northwest of Salmon, so for those of you fishing the areas between North Fork and Salmon, watch out for increased firefighter traffic and smoky conditions.  More information on the fire can be found here:  https://inciweb.nwcg.gov/incident/8249/