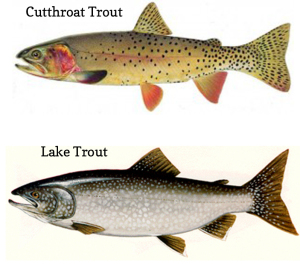 JACKSON – Montana Fish, Wildlife & Parks, in collaboration with the Beaverhead-Deerlodge National Forest, will begin another phase of a project this month to restore native westslope cutthroat trout in Selway Creek, about 25 miles south of Jackson.

This phase of the project includes removing non-native brown, brook and hybrid rainbow-cutthroat trout from Selway Creek and Selway Lake, an area within the Red Rock sub-basin. After non-native fish are removed, genetically unaltered westslope cutthroat trout will be reintroduced to this area, restoring 36 stream miles of habitat for the native fish.

From Aug. 15 through Aug. 31, the Beaverhead-Deerlodge National Forest will have a closure in the project area. Forest Road 181 and 1505 going to Reservoir Lake are part of the boundary but will remain open to travel. The Selway Peak Trail, which is also used as a boundary, will remain open, although the public is asked to stay on the trail. Additionally, the Saginaw Road (Forest Road 7335) will also remain open to travel. To see the full order, visit fs.usda.gov/alerts/bdnf/alerts-notices.

Non-native trout will be removed from the project area using a plant-derived fish toxicant called rotenone. Rotenone is used routinely in fisheries management and breaks down quickly in the aquatic environment after use. It offers an effective means of removing fish species that are incompatible with the management goals of a fishery without endangering the surrounding habitat.

Detoxification stations will be set up to ensure there are no negative effects to gill-breathing organisms downstream.

In a previous phase of the project, FWP and other agencies constructed a fish barrier at a lower reach of Selway Creek. This barrier isolates the project area to protect westslope cutthroat trout from non-native trout downstream.

Upon completion, the project will almost double the present distribution of genetically unaltered westslope cutthroat trout in the Red Rock sub-basin.

FWP published a draft environmental assessment for this project in 2019 and solicited public comments. The Montana Fish and Wildlife Commission approved the project in 2021.