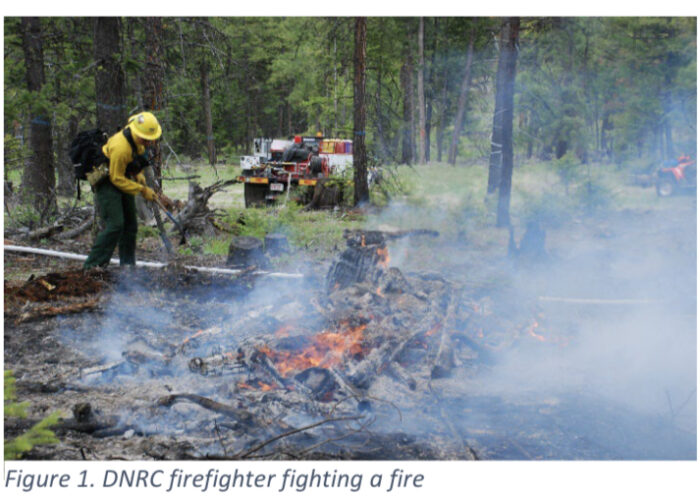 Missoula, Montana – Approximately 200 lightning strikes over the Missoula area within the last 24 hours left their mark, and Montana Department of Natural Resources and Conservation firefighters are currently battling several wildfires near Seeley Lake as a result:
Elbow Lake Fire
The lightning caused Elbow Lake Fire south of Salmon Lake was reported 8/12 and is estimated at 20 acres and is 10% contained. There are two Type 2 hand crews working to mop up (remove all residual heat) and secure fire line with engine support. The fire did receive aerial support yesterday, with bucket drops from the Missoula DNRC Type 2 helicopter helping to knock down flames. There are no structures threatened or concerns at this time.
Lost Prairie Fire
Also south of Salmon Lake, the lightning caused Lost Prairie Fire was reported 8/12 is 2.2 acres and 80% contained. Two DNRC engines are committed. Aerial support was received yesterday. There are no structures threatened or concerns at this time.
Dunnigan Fire
West of Greenough in the Dunnigan Gulch area, the lightning caused Dunnigan Fire was reported on 8/12 and is 1.0 acres and 100% contained. Crews will continue to patrol the fire and monitor for residual heat.
Mountain Fire
U.S. Forest Service firefighters are providing mutual
aid to the DNRC and managing the Mountain Fire
east of Seeley Lake. This lightning caused wildfire
reported on 8/12 is 0.3 acres burning in heavy dead
and down timber. One engine and a module are
committed. No structures are threatened or concerns at this time.
Figure 1. DNRC firefighter fighting a fire
1

Elevation Fire
Reported this morning, the Elevation Fire is a lightning caused fire located north of Bearmouth, burning in heavy dead and down timber. The fire is 0.25 acres and one DNRC engine with air support from the DNRC Type 2 helicopter is providing initial attack. There are no structures threatened or concerns at this time.
Closer to Missoula, lightning caused two more DNRC wildfires: Whitaker Bridge (0.1 acres) and Jack Ridge (0.2 acres) by Clark Creek. Both fires were reported and controlled on 8/12 and are currently in patrol status.
Detection flights by fixed wing aircraft will continue to be flown over the next few days to locate any “holdover” lightning caused fires that may still be out there. Isolated storms with accompanying lightning and gusty, erratic winds continuing through today could also continue to keep firefighters busy.
“With firefighting resources stretched thin by the numerous lightning caused wildfires, we ask residents and visitors to be extra careful when outdoors. Missoula County is in Extreme fire danger and any spark can become a wildfire…so please drown out those campfires and reduce the number of human caused fires that we have to respond to,” requests Karl Nikoleyczik, DNRC Southwestern Land Office Fire Management Officer.