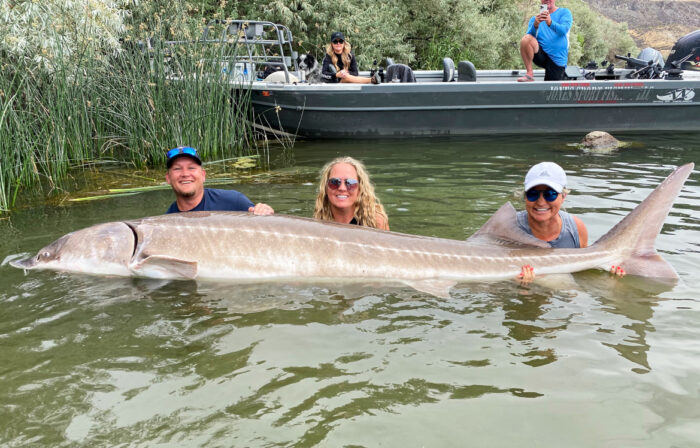 Well, it’s happened again! C.J. Strike Reservoir in southwestern Idaho – typically known for abundant crappie and smallmouth bass – has once again produced an eye-popping state record fish. Although, this time it’s not a catfish.  Greg and Angie Poulsen of Eagle Mountain, Utah traveled to Idaho, hoping to tangle with North America’s largest freshwater fish, the white sturgeon. While fishing on C.J. Strike Reservoir on Aug. 5, Greg Poulsen got his chance and hooked into a big one! Greg ultimately landed the 10-foot 4-inch monster sturgeon, and set the hook on a new state record in the process.

At 124 inches in length, this rare fish swam past the previous record of 119.5 inches, set in 2019 by Rusty Peterson and friends. While the Snake River around C.J. Strike Reservoir has good numbers of sturgeon, fish over 10 feet are exceedingly rare, and usually only seen in Hells Canyon.

Out of hundreds of fish collected during surveys from the Snake River around C.J. Strike Reservoir, only a handful of sturgeon in this class have been seen. Biologists from Idaho Power captured a 131.5-inch behemoth in 1993, as well as a 119-inch fish in 2015. Downstream in Hells Canyon, where biologists have handled more than 4,000 sturgeon during surveys over the last 30 years, only 10 fish have ever exceeded the 10-foot mark! So yes, they do exist, but these are very rare and special fish.

Fishing for Idaho’s white sturgeon is allowed strictly on a catch-and-release basis, and they may not be removed from the water while handling. Sturgeon around C.J. Strike Reservoir can take 10-15 years to reach sexual maturity, while those in Hells Canyon take even longer. The slow growth, long lifespans and infrequent reproduction means these river giants are very susceptible to overfishing, meaning populations can take decades to rebuild.

Populations have significantly declined from historic levels as a result of overharvest, hydroelectric dams, pollution and other issues. In Idaho, sturgeon fishing has been catch-and-release only since 1971. However, Idaho Power and Fish and Game have active conservation programs helping to boost sturgeon populations throughout the Snake River. Hopefully, these ancient fish will continue to bend rods and exhaust anglers willing to tangle with a real river monster.

Check out these articles for more info on Idaho’s sturgeon and efforts to conserve and manage them.

How hatcheries are helping Idaho’s sturgeon

The big sturgeon of Hells Canyon

See the State Record Fish page to view more records, and learn how you can apply!