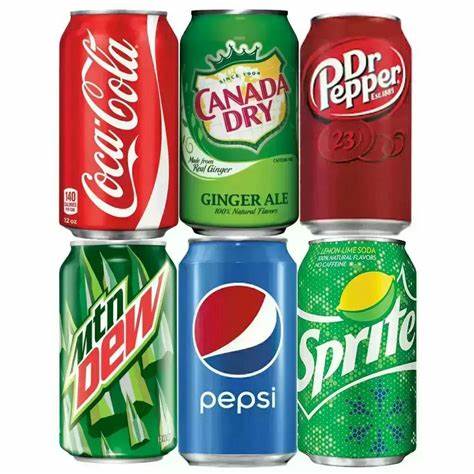 Years ago, I was the cooking camp cook, and the larder was getting low. The week grew into 10 days and the menu was shrinking. A restock was 15 miles down the trail. Fortunately, there was meat in camp, and I was able to forage for wild tasty greens and roots. Hungry hunters will eat just about anything.

Desserts became a problem. Ice was gone which meant only a few things could be cooled in the creek. No more ice in the whiskey glass. I managed to find a couple of old boxes of yellow and Ginger Cake mixes in the food box. We were out of eggs and oil. I still had some canned milk, and flour but…

I remembered how my Mother made cakes using soda! She would leave out the oil and eggs. Then she would add a can or bottle of soda. 12 oz. of soda would make a soda cake. So, I checked out the cold drinks in a sack in the creek. I found an Orange Sunkist soda and a Ginger Ale.  

I always packed in Ginger Ales in case someone got sick. Something about Ginger Ale would help to settle a stomach problem. The cake mixes I had were some off brands, that I never heard of. Both had expiration dates but… you use what you have. I buttered 2 cast iron Dutch Ovens and made up a fire.

I placed the Dutch ovens onto the coals and baked the cakes until done. I used a thin stick that I cut to poke into the middle of each cake. When there was no cake mix on the stick, I knew it was good to go.

So, I had made a Creamsicle Cake and a Ginger Spice Cake. Yummy! Since I was out of sugar, I could not make an icing. Instead, I used Hershey Bar chunks to melt on top with a drizzle of honey!

That night’s dinner was a clean the plate night. I barely had to wash the dishes.

I later looked at the Soda Cake recipes and came up with other variations.

White Cake mix and Dr. Pepper made Cherry chip cake, when you added some chocolate chips or cut up Hershey bars

A lemon cake mix, and a Sprite made a wonderful Lemon surprise cake.   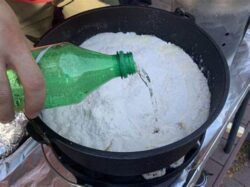 One mix I have not tried is using a Mountain Dew. Maybe with a white cake mix. It could be a Mt Dew Cake or…

If you have all the ingredients, please use them then add a can of fruit into the mix and stir. Bake and serve. If you don’t have whip cream, take a jar of Kraft Marshmallow and scoop some atop the dessert. Hunters will love their desserts.   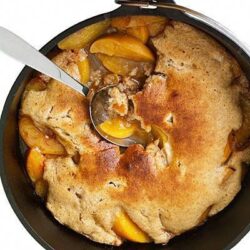 Don’t become frustrated when the camp larder is getting low. Get creative!