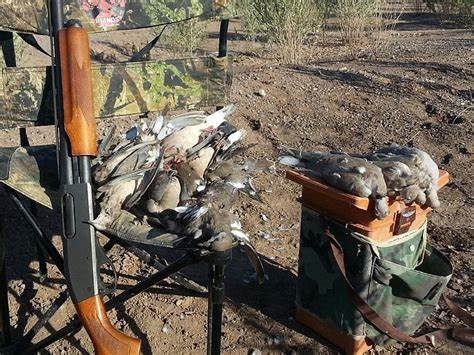 Doves are an amazing migratory game bird. For some they are the Bird of Peace. For others they are a tasty piece of bird to eat. Dove season comes in in early September, in many states.

My first limit of doves came when I was a teenager. My 20 ga. Bolt action Marlin shotgun was a hand me down. You needed to make the first shot count since using the bolt action slowed down any second shot. The tight choke did not help when you shot a close bird. It took me 4 boxes of shells to tag 18 birds, the limit, on that opening day. We hunted the edge of a just cut cornfield. Dozens of other hunters kept the birds moving.   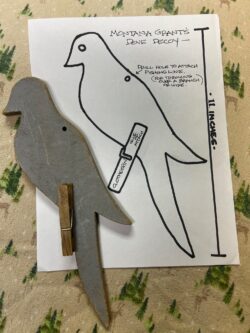 We had a cooler of ice water and another for the doves. Once home, we breasted the doves. When you pull the breast off, they come together along with the thin breastbone. Later we wrapped them in bacon and seasoned them with spices and teriyaki sauce. They were smoked on a grill, until the bacon was done. These appetizers were simply delicious.

Opening day in some states may also include other birds that are legal to harvest. In Montana, we can also target pigeons and Eurasian Doves. They are just bigger doves. The nonnative Eurasian Collared Doves are an invasive species with no limit. These birds compete with native wild species. Pet owners released pets into the wild and now they are making themselves to home. Some states also have Huns or grouse available.   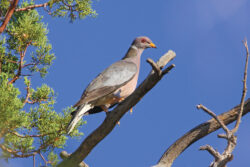 Dove hunting can be hot work. Wheat fields are a great place to sit or flush doves. Keep in mind that mice are also enjoying the free grain. This means that rattlesnakes are enjoying the mice. Wear long pants and boots. Snake chaps are not a bad idea.

Find a place where you are seeing doves on a flyway. This means forest, field, or fence line edges. Powerlines also seem to invite regular dove passages. Once you pick your spot, use a camp stool tucked into some cover and wait. With patience and good shooting, you can fill a limit.

Decoys can be useful. Wooden silhouettes can be quickly placed on a fence line, branches, or afield. Attach a wooden clothes pin to the decoy. I have also drilled a hole in the center of the decoys back and attached fishing line. Tie a bolt to the other end of the line and chuck it over a power line or high limb. Pull the decoy to the wire. It will be hanging below the wire and not sitting on it. The doves don’t know the difference. When done hunting, cut the bolt line, and let the decoy fall.   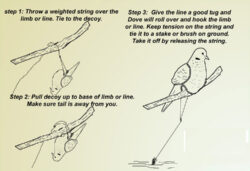 To consistently hit a fast-moving dove, SWING the gun through the shot. If you stop your swing, you will miss. When multiple birds fly by, it is tempting to shoot more than one dove. The problem will become finding them. Make sure that you mark where the birds fell. If you can’t find multiple birds, shoot one at a time.   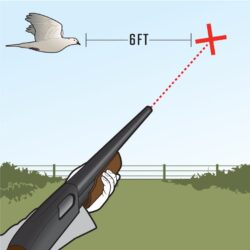 I walk a straight line to where the dove fell. When I am close to the spot, I drop my hat and begin a circle search. Look for feathers and blood. If you are observant, most doves will end up in the cooler.

Dogs are helpful but rattlesnakes are a concern. One buddy had his Black Lab on an opening day hunt. It was bit in the face by a huge rattler. A pile of rocks marks the spot where his dog rests.

Other dogs do not like to retrieve doves since their feathers easily come off in their mouths. The scent or smell of a dove are also not enjoyed by some dogs.

Doves are great shooting practice and wonderful game birds. Enjoy a few days afield before the first frosts send them south for the Winter.