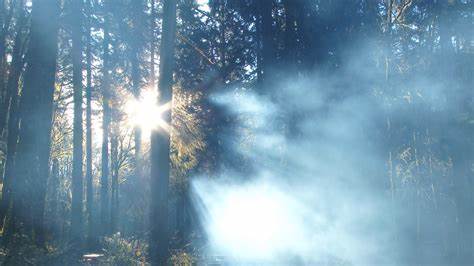 All hunters get a bit excited when the moment of truth arrives. The sight of antler, feather, or calls quickly gets our attention. Buck Fever can also make seeing harder as our adrenaline surges.

A few years ago, I was chasing bulls during archery season. I was hunting solo, maybe not the best idea, as I began closing in on a bugling bull. Suddenly, the forest was full of fire smoke. Visibility dropped and my body was telling me that I needed to leave. The bull and I were caught in a smokey fog.  

The bull was getting closer, as I stood there deciding what to do. Suddenly I saw slight movement of antlers and body. I went to full draw but could not clearly see the bull’s shoulder. He was turning and changing the angle, since the smoke was also bothering him. There may have been two bulls. I drew several times and could not decide on a clear and ethical shot. Finally, he and I parted.

When I got back to camp, the mountain was covered in smoke. I heard the drone of aircraft engines as a vintage WW2 bomber flew overhead. They must have just made a water drop. Next, I see a park ranger speeding toward me. “You need to get off the mountain!” Apparently, a camp had burned up several miles away and caused the smoke. It was traveling in my direction. I have never taken down a camp so fast. I needed my truck headlights to drive off the mountain.

Forest Fire smoke has become a greater problem. In the west, we are dealing with more drought and an annual fire season that has become more severe. Smoke from states away can impact out health and hunting.

Higher altitudes already have thinner air. Smoke that is drifting from far away tends to flow higher. If a fire is closer, the smoke tends to also be in lower areas. Fire smoke includes chemicals, gases, particles, ash, and debris. None of it is good for us or the critters.

So, what can you do if you are suddenly enveloped in fire smoke? Start by getting out of the forest. Beeline to an extract point. Most remote hunting and fishing spots lack cell phone signals. You may not have knowledge of a nearby fire problem. Winds can shift and redirect smoke from other areas. You may be safe but may not know where the smoke is coming from.

First aid means to rinse and water your eyes. Use carry water to flush your eyes. Wet a bandanna or thin shirt to breathe through. Seeing and breathing are needed to get to safety.

Commercial forest fire hoods are available at a reasonable cost. They offer full face protection and have an air supply and filtration system. These hoods fit kids and adults.   Your truck or RV comes included with exterior air filters. Get inside and breath the filtered air. Stay calm, keep moving and vacate the area.