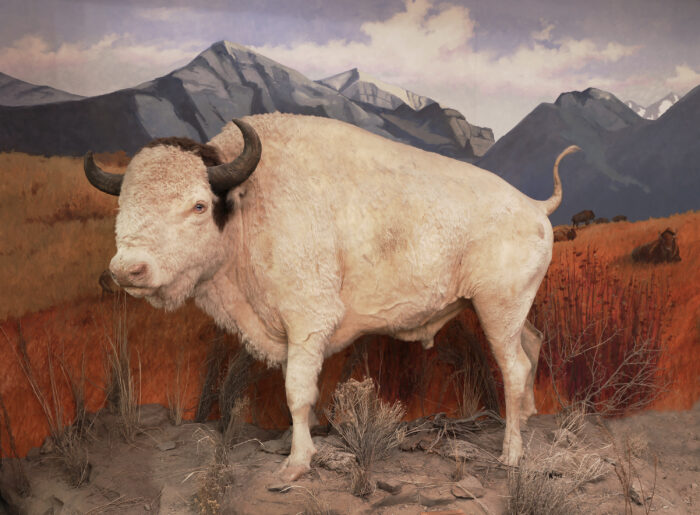 Big Medicine, the sacred white bison on display at the Montana Historical Society in Helena, is being repatriated to the Confederated Salish and Kootenai Tribes at their request.

The MTHS Board of Trustees voted unanimously Thursday to return Big Medicine to his homeland based on his cultural and spiritual significance to the Tribes.

“Big Medicine represents the past that has carried forward to the present and the work yet to be done to protect our identity, culture, and well-being into the future,” CSKT Tribal Chairman Tom McDonald had written in his repatriation request.

“We are deeply appreciative,” he said after the MTHS trustees’ vote, then paused a minute to regain his composure. “You can see it is emotional. We will treat this animal with the respect it deserves. We thank you and look forward to partnerships with the (historical) society and museum in the future. Thank you, from the bottom of our hearts.”

The white bison known as Big Medicine was raised on the National Bison Range in the Flathead and died in 1959. Former MTHS Director K. Ross Toole had contacted the bison range superintendent in 1953 requesting his hide be transferred to MTHS upon the animal’s death, and it has been on display since 1961 in a climate-controlled environment.

Earlier this year, the tribe formally asked that he be returned, noting that Big Medicine is revered for his healing and protective powers, and deep spiritual lessons conveyed in ceremonies and songs.

“It isn’t just about the history,” said Rick Eneas, CSKT executive officer. “As a people, the Salish and Kootenai are reclaiming our language and culture. One aspect of what Big Medicine symbolizes is what it looks like to hold on to the past and look to the future.

“… We as a people are at a crossroads and have gone through some significant challenges and lost a lot, but are creating a lot in the valley for the young tribal members who don’t have a connection. A symbol like this allows us to feel proud of who we are and will help us understand who we can be in the future.”

MTHS Director Molly Kruckenberg said the historical society is pleased to see Big Medicine’s ownership transferred to the Confederated Salish and Kootenai Tribes. The MTHS will retain physical possession of Big Medicine until the Tribes have a safe environment in which he can be displayed, which is expected to take about two years.

“This is not a repatriation request under the Native American Graves Protection and Repatriation Act; instead, this decision comes from discussions made on a government-to-government basis,” Kruckenberg said. “The Montana Historical Society regularly seeks advice and information from Montana’s Tribes, and this transfer of ownership reflects that positive relationship.”