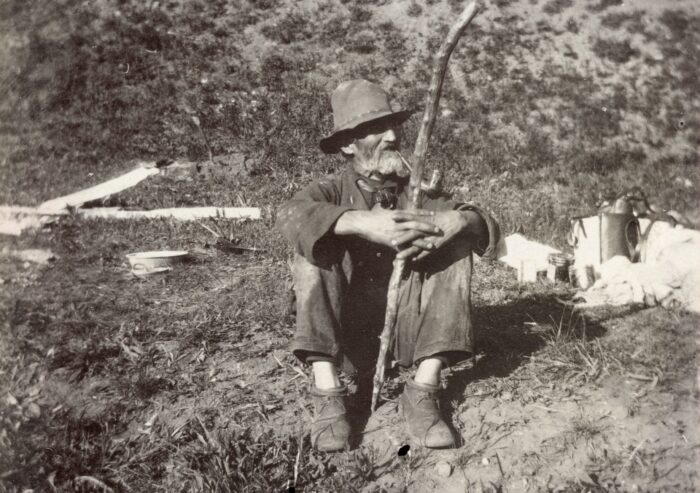 Brett French reports: A nomination for the toughest man in Montana
By angelamontana

Adam “Horn” Miller was a prospector, army scout, guide, trapper and even a bullwhacker. He settled in the Cooke City area, before it was a city, after discovering gold nearby. That was way back in 1870. On that trip of discovery, Miller and his fellow prospectors ran into some Indian trouble and had all of their horses stolen. Taking what gear they could carry, the men walked across what is now Yellowstone National Park from the headwaters of the Lamar River all the way to the old Crow Reservation headquarters along Mission Creek, just east of Livingston. Their backpacking trip may have been the first by Euro-Americans through Yellowstone. It took them 12 days to hike up and over the Beartooth Mountains and down the Boulder River to get back to the fort. They averaged about 10 to 15 miles a day, traveling an estimated 25 miles on the last day. Even though it was August, they had to stumble through deep snow at the top of the mountains. Back in those days, there were so many bears in the Cooke City region that the group killed 27 bears and skinned them out – which they had to abandon along with traps, gunpowder and flour. To read more about Horn Miller, and why one amateur historian thinks he may have been the toughest man in Montana, check out my story at: https://billingsgazette.com/news/state-and-regional/the-toughest-man-in-montana-research-reveals-cooke-city-miners-rich-past/article_c833e11e-45ca-11ed-9471-7f18e8fca6fc.html