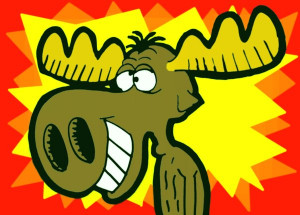 Montana girls can do it all. Recently, Alisha Zemlicka and her friend Grenda went on a drop camp moose hunt in Alaska. A tiny plane dropped them off and said, “have a good hunt!”

Moose live in marshy, muskeg filled areas where there is little hard ground to walk on. Bull moose weigh well over 1,000 lbs. and have huge antlers. Moose can live upwards of 15-25 years. After 13 years, their antlers begin to decline. Big Bulls are also noted for their large Dewlaps, or Bells, that hang from their chins. This smelly and hairy appendage displays dominance and fitness.

Alisha is a cross trainer in Bozeman and fearless when on the hunt. Last year, she and her husband Lucas, both tagged a bow bull elk in Montana, while they rolled a stroller with their daughter Payten aboard.

Archery is her passion, but rifles and pistols are also tools of her trade. Now it was time for the girls “to pull a rabbit out of their hats!”  Alisha and Grenda began their hunt together.  A bull showed up, after some heartfelt calling, and made a false charge. They were looking for a larger bull, and tried to get away from the curious, and rut powered bull. The bull continued to stalk them upwind and charged the huntresses again. Grenda pulled her 454 pistol out and fired 3 shots of 360 grain Buffalo Bore ammo. No means NO! The bull dropped 8 yards from Alisha.  

The excitement of a charging bull changed Alisha’s plan for archery hunting. She instead picked up her rifle. The hunt was now back on for her bull. Grenda’s husband Adam had found a huge set of antlers in the same area, a few years before. Adam had tried twice to locate the massive bull this year. Alisha found the monster bull in her scope at 543 yards.   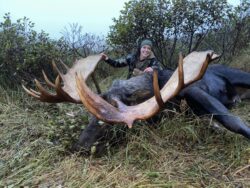 It took a lot of work to transport the meat 2 ½ miles back to camp. Quartering and backpacking out the meat are a massive job. Alisha did not have to shove a stroller though. The experienced and fit huntresses managed the task with ease. The pilot was able to make a few flights to haul the meat back to civilization.

The massive bull had a rack that was 71 ¼ inches wide. Her bull scored as the 228th largest bull ever shot in Alaska. The largest recorded Bull Moose is 83 inches and over 1,500 pounds. It takes Bulls 3-5 months to grow their amazing headgear. Not bad for a couple ladies on the hunt.

Moose meat is healthy and delicious. Montana hunting is still ahead. She plans to buy a bigger freezer!

“Jeepers, I hate to see what you guys do next!”