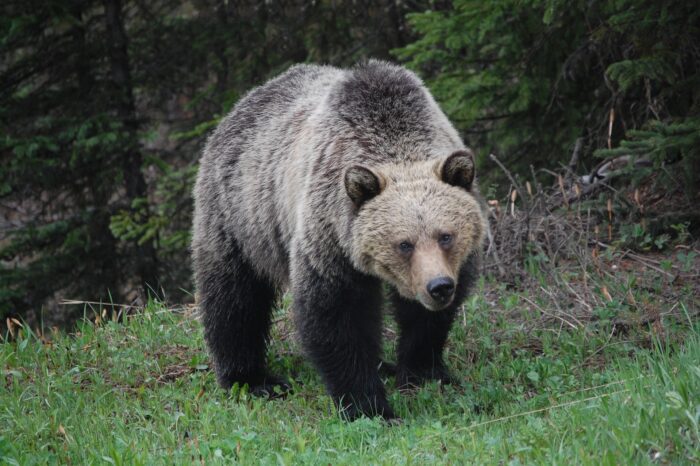 No people were injured in these conflicts. However, one grizzly bear was euthanized, and several others were relocated.

On Oct. 14, two hunters were walking along Eldridge Trail south of Taylor Creek in the Madison Range. They heard brush breaking and saw a grizzly bear charging at them. Both hunters fired multiple handgun rounds at the bear, and it left without any signs of injury. The hunters were not injured.

The bear’s charge was likely the result of a surprise, defensive encounter because of the wind direction, the bear’s proximity to the hunters and because the female bear was accompanied by two cubs.

The next day, FWP staff flew the area extensively and did not find an injured bear. During a ground search, FWP and U.S. Forest Service law enforcement staff found bear tracks and handgun casings from the two hunters, but they did not find blood, hair or any other evidence the bear was injured.

This incident is still under investigation by the U.S. Fish and Wildlife Service (USFWS).

A female grizzly bear and two cubs were recently captured and relocated from Gardiner.

The bears were first reported to FWP on Oct. 10 after eating from apple trees in town and grazing on grass and dandelions on the football field at Gardiner High School in the evenings. Staff from FWP and Yellowstone National Park hazed the bears out of town at night five times over several days with paintballs, cracker rounds and rubber bullets. The bears eventually moved to another part of town, where they continued eating apples at night. Over time, the bears continued to return and eat apples more often during daylight hours, reducing opportunities to safely haze the bears due to daytime public safety concerns.

On the morning of Oct. 17, the bears were reported feeding at apple trees near a school bus stop, which prevented kids from being able to get on the bus.

As a preventative measure, FWP trapped all three bears that evening. The bears were in good health, and there was no evidence they had gained access to unsecured garbage. In consultation with the USFWS, FWP bear specialists outfitted the sow with a GPS collar and relocated the bears to a site previously approved by the Montana Fish and Wildlife Commission.

An adult female grizzly bear was euthanized on Oct. 21 after several conflicts with people in Big Sky.

The female and two cubs frequented homesites in Big Sky for several weeks leading up to the day they were captured. The bears were also seen at Ophir Elementary School during daylight and evening hours. Gallatin County Sheriff’s deputies and private landowners made multiple attempts to haze the bears out of town with vehicles and rubber bullets, but the bears kept returning to the area.

At about 11 a.m. on Oct. 19, the bears approached a group of people on private property, forcing the people to go into a building. A landowner approached the bears in a vehicle, attempting to haze them away, and the female bear charged at them. The bears then left for a short time and returned to the property again.

FWP was notified of the encounter and trapped the bears on the property. The 25-year-old sow was found to have poor body condition, with low fat reserves and heavily worn teeth. In consultation with the USFWS, FWP euthanized the sow due to human safety concerns; the bear’s poor health, habituated behavior, and aggressive response to hazing; and property damage.

The sow was 25 years old and had been captured previously as a non-conflict bear during annual population monitoring research. The cubs were relocated to a commission-approved release site.

On Oct. 23, an FWP game warden responded to a report of an older male grizzly bear that was struck by a vehicle and killed on U.S. Highway 191 near West Yellowstone.

Montana is bear country. Grizzly bear populations continue to become denser and more widespread in Montana, increasing the likelihood that residents and recreationists will encounter them in more places each year. Unsecured attractants—such as fruit trees, garbage and bird feeders—can lead to human safety risks and property damage.

Avoiding conflicts with bears is easier than dealing with conflicts. Here are some precautions to help residents, recreationists and people who work outdoors avoid negative bear encounters:

Bears are active during the general hunting season into late fall. Hunting in places that have or may have grizzly bears—which includes areas of Montana west of Billings—requires special precautions:

Grizzly bears in the lower 48 states are listed as threatened under the Endangered Species Act. Management authority for grizzlies rests with the USFWS, working closely in Montana with FWP, the Forest Service, the National Park Service, the Bureau of Land Management, the U.S. Geological Survey, Wildlife Services, and Native American tribes. This collaboration happens through the Interagency Grizzly Bear Committee.

For more information and resources on bear safety, visit fwp.mt.gov/conservation/wildlife-management/bear.