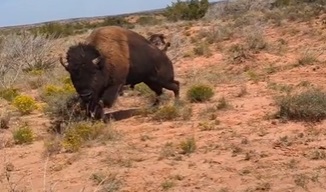 Hiker gored by bison in TX
By angelamontana

Yellowstone National Park visitors are not the only people who seem to get gored by bison.

Take a look at this hiker at Caprock Canyons State Park and Trailway in Texas hoping to avoid being too close to a group of bison as she attempts to just walk by, but she is still pretty close.  The footage doesn’t show if the bison actually did make contact with her, but, the description states she was charged and gored, so it is still a reminder (for those who need one) to keep your distance from wildlife.

@rebeccaclark Solo hiking at Caprock Canyons State Park & Trailway in Texas. I was charged and gored by a bison because I was to CLOSE to be passing them on a trailway They are beautiful creatures protected by the Texas Parks & Wildlife Department (TPWD) and are a part of the Texas State Bison Restoration Project where the park has restored the historic Charles Goodnight Bison herd (The Official Texas State Bison Herd) to a portion of its former range in the park. I am posting to support safety while enjoying Texas State Parks #TPWD #bisonetiquette101 #hikingsafety #llbean #chaos #rei ♬ dumb dumb – sped up – mazie