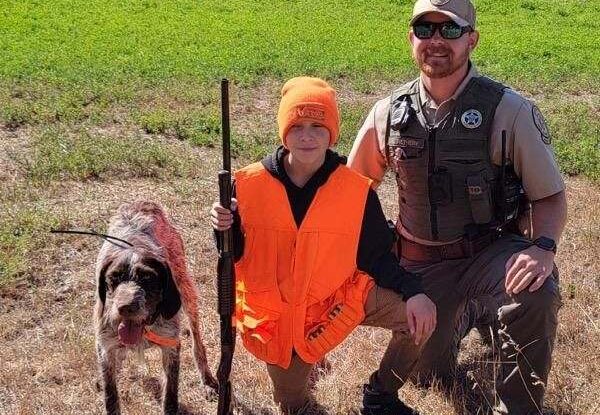 The epitome of why youth hunts are important
By angelamontana

Vern Schrader shared an awesome picture with The Montana Outdoor Radio Show crew, and it epitomized just how necessary it is for youth hunters to not only have mentors but to also get the opportunity to hunt places like Foys Bend in Kalispell during the youth pheasant hunt.

Pictured above, Parker Bradley, Schrader’s grandson, is with Warden Nethery on September 24th.  Vern and Parker were so grateful to be able to reserve this particular hunt through MT FWP.

Also included in the picture is “the trusty bird dog”, JR.

Parker is on a mission to become an “avid hunter”, according to Grandpa Vern, and Parker will be signing up to participate in the youth trap shooting competition in January. He is also a Sr. Red Belt in Taekwondo and plays basketball for Somers Middle School.  Not only does this young hunter have the skills to limit out during the youth waterfowl hunt, which he did, he also has good grades and an amazing attitude!

Parker has been through a lot at his young age and is an inspiration to so many people, especially his father, who is recovering from major surgery after an AVM and a stroke this past May. Parker has been, and continues to be, amazing support for his dad and the rest of the family.  He has a great attitude and “is such a great kid”, according to his grandpa.

We wish Parker, his dad and his grandfather, Vern, all the best, and we congratulate Parker for all of his success!  We look forward to seeing updates in the near future!

We also are including Grandpa Vern’s statement here: “Luckily the only orange we saw were vests and not jumpsuits.”

Thank you for sharing, Vern!  We look forward to more from you this season!