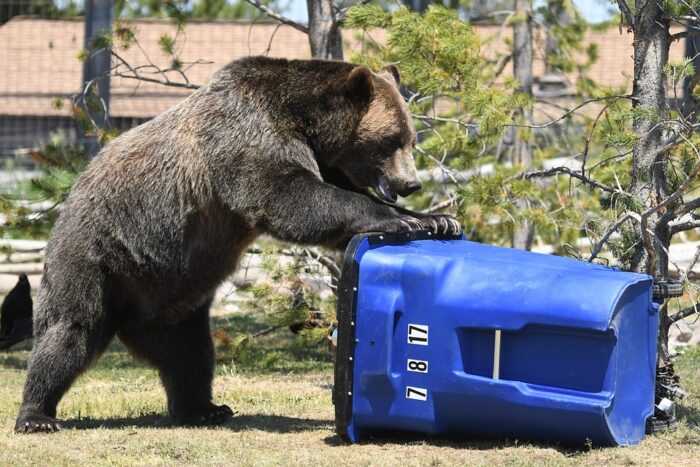 LOLO – Wildlife officials trapped and moved two sub-adult grizzly bears this week from the northern Bitterroot Valley bottom to a remote spot in the nearby Sapphire Mountains.  The pair had been spending time in the northern Bitterroot since early August when they first moved south from the Blackfoot Valley, across the Sapphire Mountains, and eventually into the area between Florence and Lolo.

Although the bears had not yet been in conflict with attractants or people, they were increasingly spending time near garbage, fruit trees and livestock food in recent weeks, prompting Montana Fish, Wildlife & Parks staff to consider preemptively moving the bears.

In consultation with the U.S. Fish & Wildlife Service (USFWS), FWP staff trapped, radio-collared and relocated the bears to a remote area on the edge of the Welcome Creek Wilderness in the Sapphire Mountains. The site was one that was approved by the Fish and Wildlife Commission earlier this year as a relocation site for grizzlies, when situations such as this arise.

Both bears were 2 years old, and one was a 230-pound male and the other a 172-pound female, likely siblings. Two years old is a natural time for some bears to begin venturing out and exploring new territory, and FWP bear specialist, Jamie Jonkel, said this pair’s activity in the Bitterroot is a reminder of the bears’ natural expansion.

Although grizzly bears don’t inhabit the Bitterroot Valley in numbers like they do in many other parts of western Montana, grizzlies are dispersing into more places as they travel between areas with established populations. Activity in the Bitterroot Valley has steadily increased over the past 10 years.

The recent events are also a reminder to be extra diligent about securing bear attractants. “This is the time of year when more bears visit the valley bottoms in search of food and are often tempted by the attractants we have around our homes,” Jonkel said. “This year has been especially tough for bear conflicts, as there was a shortage of berries and other natural bear foods in many places.”

Black and grizzly bears can be found throughout much of the western half of Montana, so it is important to review bear safety tips and keep the areas around your home free from bear attractants to prevent issues for bears and people.

Around home, be sure to keep garbage indoors until the day of collection; remove bird feeders when bears are out and active; consider using electric fencing around chickens, garden areas and compost piles; and move other attractants such as pet food, dirty barbecue grills and ripe fruit indoors or into a secure building.

FWP and USFWS specialists work to help landowners and communities avoid bear conflicts. If you see a bear or sign near your residence that may result in a conflict, call your local bear specialist at the contact number found on FWP’s website: fwp.mt.gov/conservation/wildlife-management/bear/contact. For more information on living, working, and recreating in Montana’s bear country, visit the FWP Bear Aware webpage at fwp.mt.gov/conservation/wildlife-management/bear/be-bear-aware.