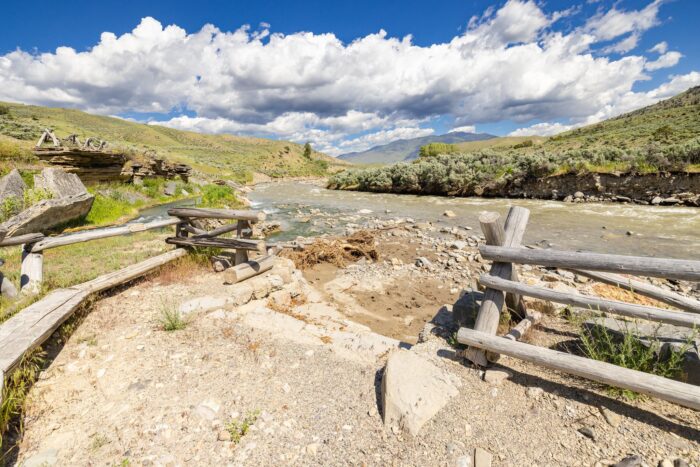 With the road between Mammoth Hot Springs and Gardiner now open in Yellowstone National Park, some folks may be considering revisiting a unique feature – the Boiling River. Located close to the 45th parallel (halfway between the North Pole and the Equator), the pools have long been a popular outdoor soaking spot. During the day, visitors might see bison or elk nearby. The site allowed the mixing of the colder Gardner River waters with the Boiling River to create a suitable outdoor hot tub, known to locals as a hotpot. Hotpotting in the outdoors is an act unique to areas with thermal waters, other places include Jerry Johnson near Missoula and along the Jefferson River near Whitehall. The difference with these pools, compared to someplace like Norris or Boulder hot springs, is that hotpots are relatively undeveloped. During the mid-June floods in Yellowstone, the Gardner River moved away from its decades-old mixing point with the Boiling River. Now the site of the pools is nothing but mud, rock and memories. The boiling pools may not seem like such a loss to some locals who for the past four-and-a-half months had trouble getting from Mammoth to Gardiner. Now, snowmobilers and backcountry skiers can once again travel to Cooke City to recreate this winter. Unfortunately, they can’t stop on their way out for a soak in the Boiling River, a great way to end a wild trip. To see more photos of the spot, check out my story at https://billingsgazette.com/outdoors/yellowstones-boiling-river-soaking-spot-left-high-dry-by-june-flooding/article_5a985daa-5a02-11ed-b0a2-3f6448c995db.html.