Fish are known as a wonderful food source. Fresh fish is tasty and healthy. Not all fish are what they seem to be. Some fish names are appetizing while others may cause you to lose your appetite. When buying fish, we prefer fresh and something that sounds tasty. Fish named with gross or unusual names are simply not as appetizing as fish sounding delicious.

Sushi is a familiar name. Most sushi eaters may not even know what type of fish is in their meal. Sushi is just raw fish. If your Sushi is a Pufferfish, it could be poisonous. It’s important to know what you are eating.

Whoever named Crappie, never ate them. These pan fish are delicious but who wants fish on their plate that relates to “crap”? Because of this distasteful name, Crappie are also known as Speckled Perch, Specks, Calico Bass, or dozens of others name. In this way, you can serve fresh fish that is not Crappie!

My Mother would never eat Pike because they looked like snakes. I am sure that she would have never touched a Snakehead. Lingcod or Burbot also look like snakes. Some say that they taste like Poor Man’s Lobster. Maybe it’s true if you never ate real lobster.

One of the priciest fish to eat at a restaurant is an Orange Roughy. This sounds citrusy and textured. Its real name is “Slime head”! The Chilean Sea Bass is called the Patagonian Toothfish. A new deep-sea fish is now competing with the Chilean Sea Bass and is called a “Thorny head”! These deep-sea fish are nasty looking but once filleted, they can make for a tasty and nice presentation.

The Monkfish sounds religious, so it must be good. One look at this fish may change your mind. It looks and tastes like the Ass Fish! Other fish are named for their mouth size, shape, color, or distinctive feature. Some of these features or habits, are just not appetizing.

Many folks prefer Tilapia. Their distinctive and perfect looking filets have a unique odor. That’s because they eat their own poop. Carp, mud cats, suckers, and any bottom feeder just sound unappealing.

Grass Carp, Bigheads, or Silver Carp are all the same fish. The problem is that “Carp” is just two swapped letters away from “Crap”. Because of this, this abundant invasive fish is not considered tasty. Ironically, in Asian restaurants, they are a delicacy. Their new name is now “Copi”. This name is a result of their “Copious” ability to reproduce. The new name sounds better, and these fish are now more inviting especially when they jump into your boat. 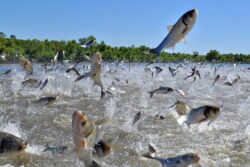 Perhaps one of the grossest, or poorly named fish to eat is a Korean Delicacy. When sauteed in a sesame oil sauce, they are tasty, sweet, and salty. Originally this fish was known as “the Fat Innkeepers Worm”! To most of the people that feast on this delicacy, they are known as a “Penis Fish”! One way to hide a poorly named fish is to name it after the way it is prepared. Fish that are broiled, sautéed, deep fried, battered, or Flambeau, Moussed, ceviche, Florentine, Cioppino, or Almondine sound tastier than other names. These certainly sound better than just eating it raw!

You are what you eat!