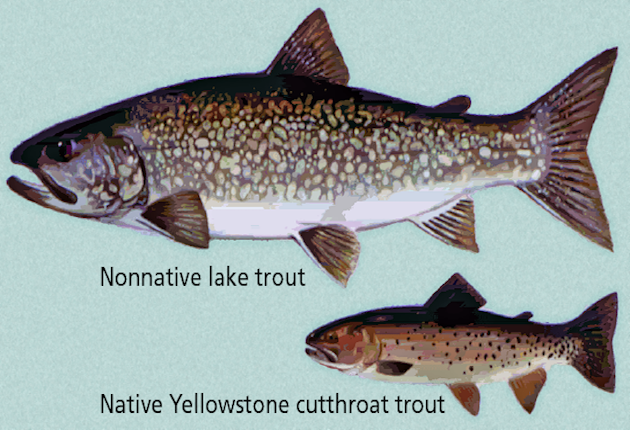 Yellowstone Lake, lake trout have ruined what was once the greatest native trout fishery in America. Thanks to Environmental Vandalism, lake trout were introduced into the deep lake. These predatory fish feasted on the Cutthroat trout until they were nearly gone. Thanks to some great Science, hard work, lots of money, and decades of eradication practices, the Lakers are near their limits.  

When I first fished for Cutties, in Yellowstone Lake, they were abundant, big, and wonderful. The 1960’s and 70’s were fabulous. Even into the 1980’s, the Cutthroats were holding on. We often fly fished a yellow bodied caddis fly, at Buffalo Ford, and landed dozens of huge fish daily. Fishing Bridge displayed thousands of trout. Today, you rarely see any.

Anyone that flyfishes for trout know how sexy a cutthroat takes a dry fly. If you set the hook too fast, you missed the bite. Once hooked, Cutties fought heavy and hard. They were not huge jumpers, but still a great trout to catch. 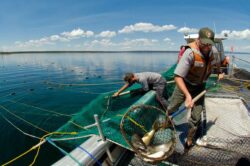 Lake Trout have a stranglehold on the Cutthroats. When cutthroats are small, they are the perfect fast food for Lakers. 3-4 cutthroats were being found in the stomachs of lakers. Throw in the hungry Pelicans, bears, eagles, and ospreys, and Cutthroats were what was for dinner. The problem surfaced in 1994.

In 2012, fishery biologists stepped up gill netting and other eradication strategies. Their goal was to reduce the lake trout population to 130,000 fish. Complete eradication is unlikely. Regulations require all lake trout to be killed when caught. Gill netting would be increased, and dead lake trout would be dumped onto Lake trout spawning grounds, where their rotting carcasses would also kill any eggs. 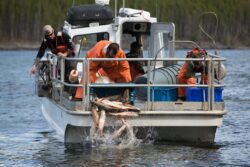 Since the netting increased, 80% of mature lake trout have been eliminated. This work costs 2-3 million dollars annually. Netting numbers are declining and are now about 300,000 lake trout a Summer.6 boats, 20-30 staff, and 40-50 miles of gill net sets a day, have removed well over 3 million Lakers. Now biologists plan to focus on spawning control using lake trout carcasses and a soy pellet that promotes lake trout egg rot. 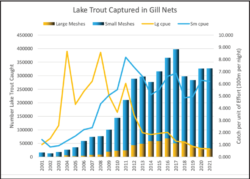 Another plan is to use Super Male breeding Lake trout that have been genetically altered to breed only male offspring. Without females, spawning could be stopped and eventually the males would age and die off completely. Wyoming fisheries is currently using this plan to eliminate brook trout populations in waters that are being restored to native species.

Cutthroat trout are making a comeback, but their population has remained flat for the past decade. When I fished Clear Creek, a major spawning creek of Yellowstone Lake, it was full of Cutties. The basin, at its mouth, was filled with a solid school of thousands of fish. Today, virtually no cutthroats spawn there. Perhaps the Cutthroats need to be shown how to spawn there again. This could mean stocking fry or eggs in the watershed to imprint where the fish should spawn. The huge numbers of Pelicans that line the spawning areas may also need attention. Each pelican eats several adult trout a day. In the 1960’s, seeing a pelican was rare but today they migrate from the Pacific Ocean, by the thousands up the Colorado River, and into Montana to pig out on trout.

Current Cutthroats seem to be stronger and bigger, but the huge populations may never return. For now, the best that can be done is to hope for the Lake trout population to crash and limit out! 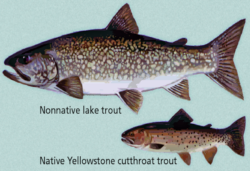