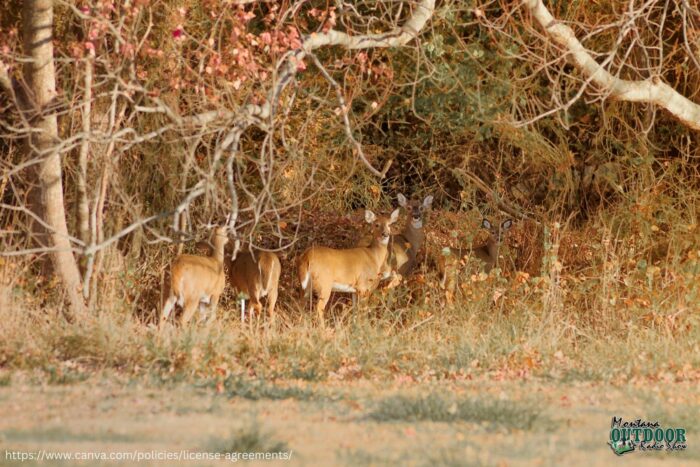 TWIN BRIDGES – A chronic wasting disease (CWD) management hunt will be held for white-tailed deer in a portion of hunting district 322 in the lower Ruby Valley.

The hunt will run from Dec. 10 through Feb. 15. Several 2022 licenses can be used for the hunt, and each—including B licenses—will be valid for either-sex whitetail harvest. Valid licenses, which will be available for purchase throughout the hunt, will include:

The goal of the management hunt is continued reduction of white-tailed deer density and the number of animals carrying CWD—a fatal, contagious neurological disease that infects deer, elk and moose. CWD surveillance across southwest Montana over the past two years, including broad CWD management hunts, continues to illustrate a localized area of high prevalence among white-tailed deer in the lower Ruby Valley, surrounded by an area of low prevalence.

So far this season, CWD has been found in about 45 percent of hunter-harvested white-tailed deer, including 80-percent prevalence in adult bucks, within the boundaries of the management hunt area. Without substantial population reduction, localized CWD prevalence is expected to increase in the coming years.

The management hunt area includes almost exclusively private lands south of Twin Bridges along the Beaverhead and Ruby rivers. A map of the hunt area can be downloaded from the link below.

As always, landowner permission is required before hunting on private lands. The relatively small hunt area will limit the number of hunters who can participate. All other 2022 hunting regulations apply, including regulations on carcass disposal. Information on proper carcass disposal can be found online at fwp.mt.gov/CWD.

CWD testing is optional for hunters, but samples from hunter-harvested deer are desired for CWD monitoring. Some participating ranches will require testing as a condition of hunting. Montana Fish, Wildlife & Parks pays for the testing, making it free for hunters. FWP has provided resources to help hunters collect and submit samples for testing on their own. These resources can be found online at fwp.mt.gov/CWD. Hunters can also call a regional FWP office to schedule an appointment if they need help collecting a CWD sample.

CWD was first detected in Montana’s wild cervids in 2017. It has since been detected widely along Montana’s northern and southern borders. CWD was first detected among white-tailed deer in the Ruby Valley in 2019 and is now known to occur at low prevalence in the Ruby, Beaverhead, Big Hole and Jefferson watersheds. White-tailed deer in these areas are contiguous with populations of white-tailed deer where CWD has not yet been detected and seasonally overlap with populations of mule deer, elk and moose. Known distribution of CWD in Montana can be view by visiting fwp.mt.gov/CWD.

CWD is not known to infect humans. However, the Centers for Disease Control and Prevention recommends that people not eat meat from infected animals and have their harvested animals tested before eating them if they were taken from an area where CWD is known to exist. For more information on CDC recommendations, please visit go.usa.gov/xAcnc.