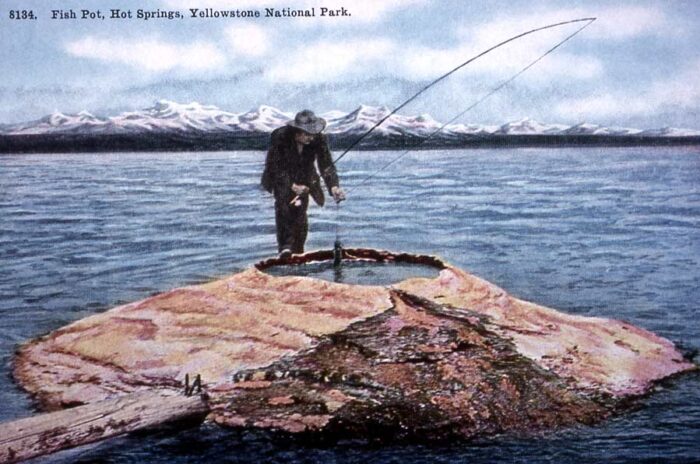 HOOKED ON THE PARK!!!
By Montana Grant

Fishing in the Yellowstone region is simply amazing. Many visitors come to the area to catch fish each year. Trout, Grayling, and Mountain Whitefish have been fished for over 11,000 years. Since the area became Yellowstone National Park, in 1872, fishing has increased and improved.

Many do not realize that most of the waters in Yellowstone Park were devoid of fish! It was not until these waters were stocked in the early 1900’s, that most of the park’s famous fisheries contained any trout. These included the Firehole, Gibbon, Madison, and many lakes. 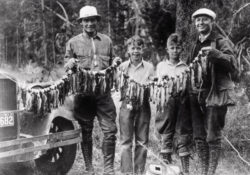 Hatcheries in Yellowstone Park stocked over 310 million trout between 1889-1955, in Yellowstone Park. These same hatcheries also produced over 818 million eggs for trout fisheries across North America and beyond. Rainbows, Browns, and Brook trout were introduced throughout the region.

Other fish species were also introduced but often failed. Largemouth Bass, Landlocked Salmon, and a long list of other species were dumped into Yellowstone Lake. Some other lakes had yellow Perch introductions that were ultimately eradicated. Sadly, indiscriminate illegal stocking occurs. Lake trout and other non-native bait fish have also been released into Yellowstone Lake. The Park Service has been attempting to eradicate them for over 20 years and is just now making headway.

When the park was created in 1872, there was no limit on how many fish could be kept. The only requirement was that they had to be caught on hook and line. Some anglers kept every fish to use as fertilizer, photo ops, or just because they could. This changed in the 1920’s when the limit of 20 fish per day was started. Later this dropped to 10, then 5, then 3, in 1954, as fisheries declined. In Yellowstone Lake, there was a slot limit established in the 1960’s, of 3 trout under 14 inches. It was hard to catch fish that small! Bait fishing was allowed until 1969. During the July opener, along the Yellowstone River, Lehardy Rapids, Fishing Bridge, and other waters were shoulder to shoulder. I used live bait from large stone flies or hoppers to catch my trout as a kid. 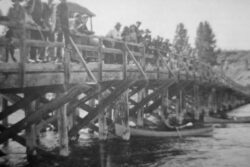 The first Fly Fishing Only areas included the Gibbon and Firehole Rivers. These waters were stocked into the 1960’s by transferring netted trout from several trout raising lakes, such as Trout and Grebe Lakes. I remember watching the park employees stock adult browns in the Gibbon River as a kid. We excelled with Wooly worms, Joe’s Hoppers, and Muddler Minnows. 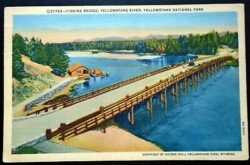 Today, YNP fishing season opens around Memorial Day and closes the first Saturday of November. Over 70,000 fishing permits are sold annually. You can only keep fish in a few areas such as Shoshone/Lewis Lakes, Lewis River/Falls, and some brook trout waters. Lake trout caught in Yellowstone, Shoshone, and Lewis Lake must be killed along with all rainbow Trout in the Lamar River. This rule is designed to protect the native Yellowstone Cutthroat trout.

Other non-native Rainbow, brown, and Westslope Cutthroats are required to be returned alive. Catch and Release fishing is what most anglers trek into the region to catch. As angler density increases, trout populations are declining.

The cool waters in the park have warmed, due to changing geothermal conditions. The Midway Geyser Basin and Firehole Rivers are several degrees warmer than they once were. The schools of huge trout are gone. The massive Yellowstone Cutthroat runs that could be seen from Fishing Bridge and many spawning rivers are also declined but may be coming back.

With increasing tourist and angler pressure in the park, fishing has become harder. Increased pelican flocks, more Grizzly bears, and predatory critters feast on the fish that remain. Fish that are Caught and Released can only survive the abuse a few times. Severe Winters and drought conditions are also a concern. This year severe flooding destroyed access and watersheds. The Gardiner River may never be the same. Soda Butte creek also suffered severe damage just as it was returning to a native cutthroat fishery.

One thing that’s constant is how Yellowstone Park has survived over many thousands of years. It has also survived as a park for 150 years. We all hope that this will continue for many more.

Fishing in Yellowstone always fills your limit of beauty, diversity, and adventure.