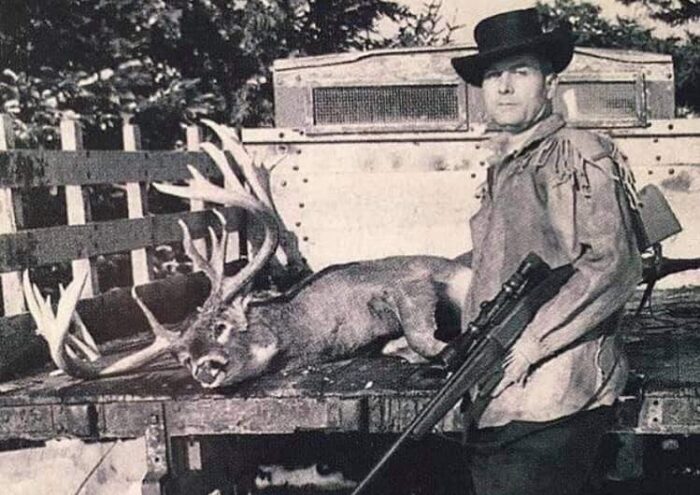 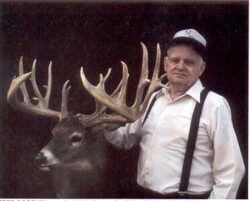 This buck was harvested by Fred Godwin in Silver-ridge, Maine back in 1949.  How crazy is it that this buck grew organically to this size?

If you are obsessed with whitetails and the rich history of the sport, you probably know all about this buck from 1949. If not…here we go!

A man by the name of Fred Godwin harvested this massive buck on a cold winter morning in Silver-ridge Maine and till this day nobody has ever seen such a monster that has grown organically to this size.

Here’s a little more history on the massive buck:

AFTER WORLD WAR II, Fred Goodwin and his brother Edwin resumed their whitetail guiding service in northern Maine. While still-hunting in late 1946, Edwin shot at and missed a huge buck at close range near Silver Ridge. That night in camp, he described the buck to Fred as having had a “three-foot outside spread.”

The following summer, while scouting near his remote deer camp, Fred saw the enormous buck in velvet. He hunted the big buck that fall as well as the following year. Although he saw it several more times, he never got a shot.

Then, in 1949 he finally caught up with the massive whitetail while hunting in late November with his trusty Model 99 .300 Savage. Had it been scored at that time, it might well have been a new-world-record typical. “He was an old bugger with his teeth all worn down,” Fred said.

It just so happened that one of Fred’s regular guided hunters, Maylan Audiburt of Pennsylvania, was in camp. Maylan talked Fred into selling him the Silver Ridge Buck rack for $100 under the condition that if he died before Fred, the rack would be returned to its original owner. In order to take it home with him on the train, Maylan had to split the skull plate into two pieces for easy transport.

Ironically, Maylan died in 1994 and the rack was returned to Fred. It couldn’t be entered in B&C because of the split skull plate. After Fred repaired the skull plate and remounted his incredible Silver Ridge Buck, the huge 18-point, main-frame 6×6 unofficially gross-scored 220% inches typical with a 24%-inch inside spread and an outside spread of more than 30 inches. Had the skull plate been intact, this would have made it No. 2.

Have you seen a whitetail anything close to this size in Montana?