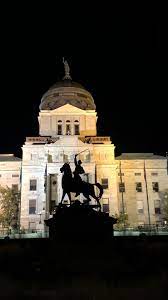 HELENA, MONTANA —  Hunters, biologists, and landowners are asking lawmakers to set aside $200 million of Montana’s historic budget surplus to establish a permanent trust account that would dramatically expand the pace and scale of stewardship and restoration treatments in rural Montana.

The proposed ‘Montana Legacy Trust’ was unveiled today by the Montana Citizens Elk Management Coalition at a small event at Capital Sports in Helena. The coalition says the investment would help rural Montana respond to ongoing environmental changes that are harming waterways, agricultural lands, and public lands.

Jourdonnais says the goal is to create a flexible and accessible program for Montana.

“The Legacy Trust could support any project, brought forward by any Montanan, anywhere in the State,” he said. “It could be used to enhance wildlife habitat on public or private lands, improve or develop water resources, boost the productivity and profitability of small farms and ranches, or mitigate against the impacts of wildfire and invasive species.”

According to retired Fish, Wildlife and Parks Deputy Chief, Mike Korn, the Legacy Trust would build on Montana’s strong history of partnership-based programs.

“It’s been shown time and time again that Montana’s best programs are those that break down barriers and are broadly inclusive,” said Korn. “Partnerships will be the lifeblood of this program because of their power to leverage and bring together numerous resources from all corners for the long-term good of the land and all Montanans.”

This partnership-based approach has been the hallmark of a trust account established in Wyoming nearly two decades ago. Since 2006, Wyoming’s Wildlife and Natural Resource Trust program has supported over 750 projects, leveraged $5.6 dollars for every dollar spent, and put nearly $100 million on the ground for restoration and stewardship treatments.

“During my career at FWP I found it was local people who knew the land and wildlife best,” said Korn. “This is designed to give local people – landowners, hunters, anglers, and just plain Montanans, tools and resources they need to utilize their knowledge in ways that are sustainable and reflect their values and natural land ethic.”

The proposed trust account would be administered by the State. Annual interest gained would be available to groups and landowners through grant-based applications awarded by a diverse seven-member citizen-board appointed by the Governor.

Potential applicants would include conservation districts, irrigation districts, tribal governments, 501 (C)3 non-profits and state & federal management agencies among others. To be eligible for funding, the stewardship and restoration projects would generally need to fall under three broad categories:

“The restoration and improvement of habitat throughout the State is at the core of solving Montana’s most complex wildlife issues,” said Matt Wickens, a rancher and outfitter in Central Montana. “I see the Legacy Trust as an excellent opportunity to make meaningful change in the improvement of our natural resources.”

“Our ranch has quality elk hunting because we have quality habitat. We allow substantial public hunting but turn away many requests due to limited space,” said Scott Hibbard, of Sieben Livestock in Cascade County. “If habitat were improved on public lands those lands would hold more wildlife which would increase hunter opportunity. By holding more elk those lands would also relieve negative impacts ranchers experience from large elk numbers.”

Montana is experiencing a one-time budget windfall from federal stimulus dollars. The state’s budget surplus, collected from the previous biennium, is estimated at roughly $2 billion dollars.

That represents a golden opportunity to establish a legacy, says Chris Marchion, a hunter and member of the Montana Outdoor Hall of Fame from Anaconda.

The Montana Citizens Elk Management Coalition estimates a one-time investment of $200 million could yield between $4-$8 million in annual interest to fund the program and necessary staffing.

The proposal is currently being reviewed by Montana legislators. It has already raised the interest of at least one State lawmaker.

“It’s an idea worthy of consideration, because it could help the land, and its stewards, in rural Montana, over the long haul,” said Senator Jeff Welborn, R-Dillon, who chairs the Senate Natural Resource Committee.

“At the end of the 2021 session, I asked for people to bring solutions forward that unite, rather than divide. Many ranchers are also hunters, but all are typically conservationists. The elk coalition has spent the better part of a year bringing the affected interests together, and I’ll be encouraging my colleagues to look under the hood of this, and other proposals,” he said.