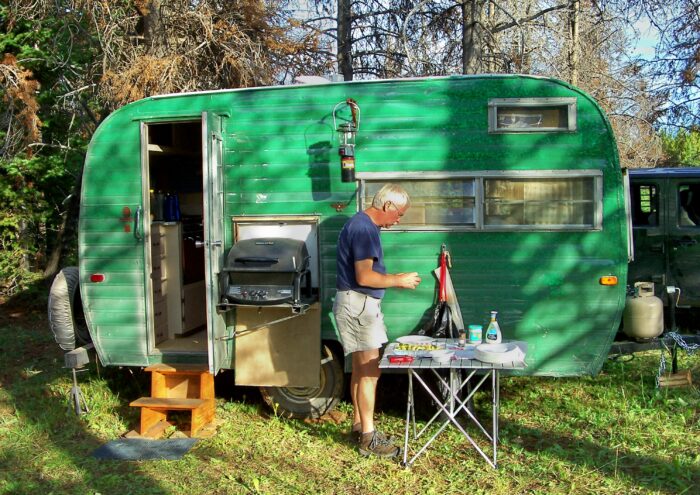 THE GREEN BEAN!!!
By Montana Grant

We have all had our favorite camping Shangri-la campers. The Green Bean was one of the best. My friend Darryl Conrad found this old 1960’s fixer upper and painted it green. Once the mice and crud were cleared out and away, the tiny camper showed some real charm. 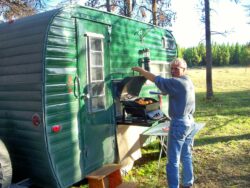 The only thing that really worked well in the camper was the old-style RV heater. The steady warmth was welcome after a hard day trekking after elk. The beds were less than 6 feet long which made it hard for us taller men. We used an outdoor toilet since the smell could get rough inside. The fridge was busted so Darryl replaced it with a slide out grill. It was a camping grillers dream come true.

Chef Conrad made wonderful meals on the grill. No better steaks, burgers, or meals were prepared better than at the Green Bean Grill.  He would pick herbs and spices from around the campsite to enhance the flavors. We ate like kings in the most remote places. 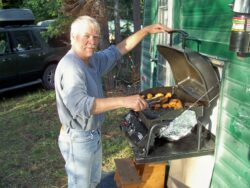 The Green Bean survived a near death experience when an old dead tree fell next to it. A few feet to the left and the story would have been worse. The truck took a hit and the bed’s cap got crushed. That old tree ended up being cut up for firewood. 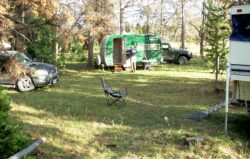 For several seasons, the Green Bean was the home base for our band of Elk Hunting Brothers. One night, The Green Bean took a fatal hit. A grizzly bear tried to visit via the grill side of the camper. The well scented grill probably made an irresistible invite for the hungry bear. He grabbed the grill and broke the side of the camper, with the campers inside! The wood frame that supported the metal siding cracked but did not break. The screaming campers inside scared the bear off. Sadly, that was the Green Beans’ last outing.

Chef Conrad has a new RV, but it is not quite the same. He sold the Grizzly ravaged Green Bean camper to a couple that moved to Alaska. It was then sold again and made into a Food Truck tow behind. At least the camper and campers did not end up as a bear’s green bean casserole!