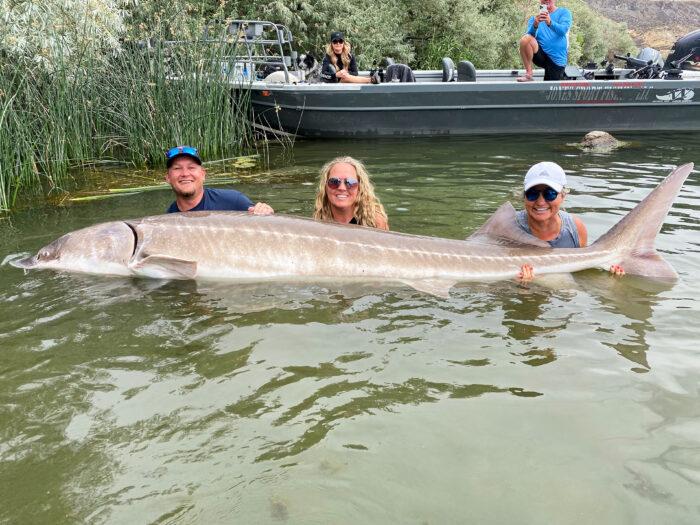 From a catch-and-release record cutbow in Henrys Lake to a dramatic state-record catfish saga that could have been written by John Grisham, the past year’s record-setting fishing stories was one for the ages. Anglers from both within and outside of Idaho’s borders hoisted up some incredible benchmarks during 2022 and have pictures to show for it.

In total, 2022 had 19 new state records, which included 6 certified weight records, and 13 new catch-and-release records. Making the cut this year are the following angler trophy stories. It was the fish story heard all around the state and maybe even further. Fruitland angler Paul Newman originally hooked what he and Fish and Game biologists thought was a record-setting channel catfish on July 20 from C.J. Strike Reservoir. This Snake River impoundment is known for putting out massive channel catfish. In fact, angler Cody Kastner set a new certified-weight record channel catfish of 32.9 pounds from the same reservoir just a month earlier. Newman thought he would have the catch-and-release record locked up with yet another big channel cat.

That is, until one savvy biologist stuck their head under the ‘official review’ hood and noted that it wasn’t in fact a channel catfish, but a blue catfish.

The case of mistaken identity was a revelatory moment for both angler and Fish and Game fisheries staff. Blue catfish can be difficult to distinguish from channel cats, and this 42.5-inch long behemoth swam right into the state record books as the first-ever Idaho record for blue catfish. You can read more about this melodrama here. While C.J. Strike Reservoir is a go-to spot for yellow perch, crappie and smallmouth bass (and apparently the occasionally blue catfish), one angler discovered that the fish tugging on the end of his line on Aug. 5 was not a mere 10-inch crappie, but a 10-foot white sturgeon.

That day, Utah residents Greg and Angie Poulsen broke the previously set record back in 2019 when they reeled in the 124-inch long (or 10-foot-4-inch) sturgeon, thus clinching the new catch-and-release state record.

While the Snake River around C.J. Strike Reservoir has good numbers of sturgeon, fish over 10 feet are exceedingly rare, and usually only seen in Hells Canyon. Further north along the banks of the North Fork Clearwater River, Lewiston angler Jerry Smith more recently added his name to the Idaho state record books when he caught a 30-inch coho salmon on Nov. 13.

While Idaho’s catch-and-release record program has been around since 2016, this is the first application for an ocean-run coho salmon, setting the stage for future records. In the fall, the Clearwater River is home to several ocean-run species migrating back to Idaho, including steelhead, fall-run Chinook salmon and coho salmon.

You can read more about Jerry Smith’s coho record here. Over in the eastern part of the state, Hailey Thomas of Rigby landed a new catch-and-release state record from Henrys Lake. On Oct. 4, Thomas reeled in a whopping 36-inch cutbow (rainbow/cutthroat hybrid) trout, breaking the previous record for cutthroat/rainbow hybrids by 6 inches!

Hailey and her husband, Shane, set out on the lake with their two kids, hoping to enjoy an afternoon of warm fall weather and hopefully catch a few nice trout. Despite the beautiful weather, the water was a bit off-color, and fishing was slow. By mid-afternoon they were struggling to locate fish with only a few trout to hand. As they raised the anchor to move spots, Hailey hooked up on a heavy fish.

Henrys Lake in eastern Idaho is famous for its blue-ribbon trout fishing and is home to native Yellowstone cutthroat trout, as well as rainbow/cutthroat hybrid and brook trout. Catfish angler breaks his own record on the Snake River

Jared Holt is no stranger to the Idaho state fish record books. During a fishing trip on July 9, Holt felt a tug on the line and reeled in the biggest catch-and-release flathead catfish on state record, a 43-inch long giant.

Feeling the fight of a 40-plus inch catfish on the end of his line was not the first time for Holt, either. The Homedale angler previously set the record back in 2020 when he hooked a 42-inch flathead catfish.

Idaho has several species of catfish, the most common of which are channel catfish, brown bullhead and black bullhead. While these species are commonly found across Idaho, flathead catfish are found only in the Snake River, mostly in Brownlee Reservoir and upstream of it. Another Lewiston angler wound up entering the record books this year when he caught a 23.5-inch smallmouth bass in nearby Dworshak Reservoir. After a quick photo, Travis released the bass back into the lake that May 10th, and secured a new catch-and-release state record. His trophy bronzeback eclipsed the previous record of 22.75 inches set by Dustin Shepard only two years earlier in 2020.

Dworshak Reservoir — formed by the North Fork Clearwater River in north central Idaho — has a long and well-deserved reputation for trophy smallmouth bass. The reservoir has produced the last 2 catch-and-release records, but also holds all the certified-weight records for smallmouth bass since 1982. Jon Urban and his daughter Hayleigh might be considered frequent fliers in Idaho’s state record fish program. The pair made the record books once again in 2022, with a duo of Lahontan cutthroat trout.

In early October, they made the trip to Grasmere Reservoir, south of Bruneau in Idaho’s high desert, in search of the unique trout, only stocked in a few Idaho lakes. Hayleigh landed a 21-inch Lahontan cutthroat, setting a certified weight record at 3.14 pounds, while her dad, Jon, landed a new catch-and-release record with a 20-incher.

The four subspecies of Idaho’s cutthroat trout were broken out as separate record species back in 2016. By the way, the certified weight records for Yellowstone and Westslope cutthroat trout are still open. Most places are catch-and-release for these species (but not all), so check the regulations first before harvesting one.

One could say 2022 was a good year for non-game species action too. While they might not make great table fare, several are native species and still fun to catch. Dayton Schild took home the trophy for the largest non-game species with a catch-and-release record common carp of 38 inches from American Falls Reservoir.

Kaden Hammer of Idaho Falls made a very strong showing with a pair of catch-and-release records for both Northern pikeminnow (27 inches) and Utah chub.

Honorable mention goes to Raiden Schneider for setting Idaho’s smallest certified-weight record with a “large” 0.08-pound redside shiner – not bad for one of Idaho’s native minnows.