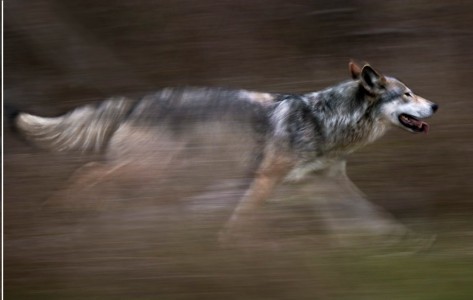 Wolf Attacks Bicyclist while Riding from Idaho to Alaska
By angelamontana

Remember the man on the motorcycle in Canada that took pictures of the wolf that chased him? (click HERE for his story)  Well, another story has surfaced, only this one is a little scarier, as this man had no motor on his bike!

According to an article posted in the Spokesman Review, another wolf encounter took place during a tour from Sandpoint, Idaho on a 2,750 mile tour to Point to Bay in Alaska.  The charity  supports the Sandpoint Backpack Program.

Here is the story that Mac Hollan posted on the Point to Bay Facebook page that describes his intense and bone-chilling encounter with a gray wolf:

Two days ago I was attacked by a wolf while riding down the ALCAN. With all the planning for bears, road safety, and everything else, this scenario was something that none of us had ever considered. But, if you read on you will find out how I found myself alone on my bike being chased down and attacked by a Canadian Gray Wolf.

It was around 2:30, about 60 miles west of Watson Lake on the ALCAN,… I was a bit ahead of the guys when I heard something to my right. Thinking Gabe or Gordo had caught up without me noticing I looked over my shoulder and was shocked at what I saw. The first thought that ran through my head was “that is the biggest damn dog I have ever seen!”. This surreal moment of shock and confusion passed immediately was the “dog” lunged for my right foot and snapped its jaws just missing my pedal. 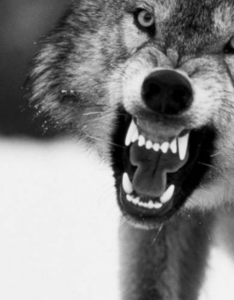 WOLF!!! At this point I received the biggest jolt of adrenalin I have ever had in my life. Without so much as a thought I shifted my bike to the highest gear possible, started to mash the pedals like never before, and reached for the bear spray in the handlebar bag. I threw off the safety and gave the wolf a quick blast in the face which served to slow him down so that he was now 20 feet behind me but still not stopping. He hung back for maybe 20 seconds and then raced forward and attacked my panniers, in the process ripping my tent bag and spilling my poles onto the highway.

I gave him another shot of pepper spray, which again backed him off to about 20 feet behind. Despite pedaling like I have never pedaled before, the wolf kept pace with me easily. It was at this point that I saw an 18 wheeler round the corner and began to wave, shout, and point to the wolf frantically. As he slowed I began to breathe a sigh of relief, thinking if I could just get off my bike and into the truck fast enough I would be safe. After taking a good look at the scene the driver resumed his speed and drove on.

This same scenario would happen to me 4 separate times, with my desperation growing with each car that passed me by. Every time the wolf would begin to close on me again, I would shoot a quick blast of bear spray behind me to slow him down.

As I came around the corner, to my horror I saw a quick incline, and knew that I would not be able to stay in front of this wolf for much longer. I just kept thinking about all the shows I have seen where wolves simply run their prey until they tire and then finish them. It was a surreal moment to realize that I was that prey, and this hill was that moment. The only plan I could think of was to get off my bike, get behind it, and hope that I had enough bear spray to deter him once and for all when he got close enough.

It was also at this point that I realized I might not be going home, and I began to panic at the thought of how much it was going to hurt. About .2 mile before the hill an RV came around the corner, and I knew this was it. I placed myself squarely in the center of the road and began screaming at the top of my lungs “help me, there’s a wolf, please help me” while waving frantically. Seeing the situation the driver quickly passed me and stopped on a dime right in front of my bike. I don’t know how I got unclipped or off my bike, but I swear I hurdled the handlebars without missing a beat or letting go of my can of bear spray. When I got to the backdoor of the RV still screaming, the door was locked. In an absolute panic I began to climb in the passenger window, but the driver reached across and threw the door open to let me in. By the time I shut the door the wolf was already on my bike pulling at the shredded remains of my tent bag. I began to shake, and cuss.

More cars began to pull up and honk at the wolf, but he would not leave my bike, as though he thought it was his kill. It took someone finally beaning him in the head with a rock to get him to leave. At this point Gabe and Gordo showed up looking confused and concerned with a set of shattered tent poles in hand. While I know I got the names of the man and woman who saved me, for the life of me I can’t remember them now. I do remember the woman giving me a hug that felt like the greatest hug of my life.

Still jacked on adrenalin, all I wanted to do was get out of that place, and get out fast. The folks in the RV were nice enough to watch our backs as we got a ways down the road before leaving, and gave one final wave as they passed by. I gave them a card for the ride and I hope they are reading this so that they know how much I am in their debt and how grateful I am that they stopped to save me. Otherwise I honestly don’t think this story would have ended well.

We made it about 10 miles down the road before the full adrenalin rush wore off and then everything seemed to go into slow motion and I just felt dizzy and tired. We pulled over to a roadside creek where I stumbled down to splash water on my face and basically sat in the creek and lost my s%$t. The full implication of what had just happened to me sank in, and I just lost it for a good 15 minutes.

We have spent a lot of time talking about the incident since, and the only conclusion we can come up with is that the wolf was old, sick, or injured, to be chasing something down on the highway. I would not doubt I am the first cyclist ever to have this happen to them on the ALCAN. That being said I have tried not to let this experience change my positive feelings about being out here, but I do look over my shoulder more, and am a bit jumpy.

While other things have happened since the last update, this is all I can really remember. We’re in Whitehorse, Yukon now, having pulled off a century before 2:30. We’re planning on doing some bike work here and relaxing for the afternoon. That’s all for now.