Have you ever wondered what life would be like if giraffes thrived like deer in Montana?  Although I can’t say that I have ever wondered that until seeing the photos below, I have concluded that, in my opinion, we have enough animals to worry about with our current four-legged population.  I bet hunters would have 50-feet ceilings for their giraffe mounts and giraffe burgers would be nothing unusual on menus within the state.

Well, much like the story posted about two bald eagles that crash-landed on a Minnesota airport runway (click HERE for full story), a giraffe became a victim in a head-on collision with a Cessna in Africa.  I wonder if the giraffe population in this area is somewhat similar to our deer population?  Probably not, but how on earth does a person hit a giraffe…in an airplane? 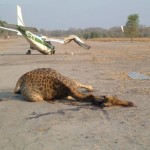 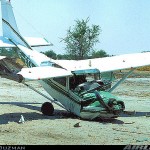 Check out the following story posted on maunpilot.blogspot.com that explains how a Cessna managed to kill a giraffe:

The story behind the picture: a researcher for African Wild Dogs collided with a giraffe at Santawani airstrip in Botswana close to Maun, in the Okavango Delta, in his Cessna 172 with registration V5-ETS. From the position of the flap on the wing I’d presume it happened on landing. The pilot fortunately sustained <only> minor injuries. The aircraft and the giraffe were not that lucky. And as you can see from the picture that was on Airliners.net (but unfortuntely is not there anymore) the 172 was damaged beyond repair.

The story does not end here. From the picture some have misread the registration number as V5-EYS (no surprise seeing the creased fuselage). This is true even for FlightAware flight tracking portal. And a James Dean like cursed Porsche story started to unveil. The rumor goes that the registration was reassigned to a PIPER PA28. The plane was owned by a Swakopmund doctor, and I saw it a couple of times on the apron. This airplane crash-landed last year here in Namibia on a gravel airstrip at the Urusis farm in the Maltahöhe district just after take-off. Fortunately, nobody was hurt in this incident.