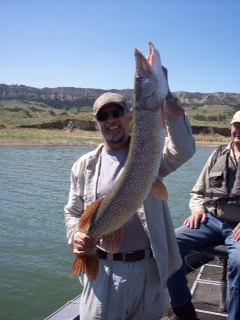 John Shuler, aka Woody, took a few days and went to Fort Peck last week with a few friends.

The weather was hot, and fishing started off slow, but it picked up as the days went on. Pike were hitting “almost all the time” with Smallmouth Bass biting in between.

Woody said the coolest thing was the Crappie coming on these days, as they’ve really increased.  He also noticed a Channel Cat population explosion.

Anyway, they all had a great time and Woody caught and released a really big Northern Pike lady the second day out. She measured 45 1/2 inches, and she’s out there for someone else to catch.  Woody’s comment on his big pike catch was “Now I’m going for a 50”.