You may remember Jeramiah Mathis from his successful mountain lion kill, using his AR-15, last year (click HERE for full story).  He is no stranger to Montana’s mountains, and he knows how to track wildlife.  Jeramiah wasn’t planning on bear hunting last week, but, as it turns out, that is exactly what he ended up doing.  He ended up shooting his first bear ever with his bow!

This is quite the story–check it out in his words:

Tony Sisson and myself took the gamble Saturday morning to hunting high elevation, in the snow, about 6 inches. Working down the ridge, we did several series of cow calling, with no avail. We, then, got worried that the snow had pushed the bulls we had been chasing for several weeks, to the lower elevations.

Around 10 a.m., we heard a bunch of crows causing a ruckus and decided to investigate. We worked for 15 minutes or so to get downwind of the rotten smell, when all the sudden, we froze. There was a black bear eating on the elk. I was able to off a shot.

While giving the bear time to expire, we harvested the antlers of the 4×5 bull that the bear had buried under a bunch of grass. We began tracking the bear and found it was only a marginal shot. But, thanks to the snow, we were able to track the bear for about an hour, and it ended up treeing. We finished the 275-lb bear in the tree. We rounded up 4 guys, loaded the bear onto a military stretcher and packed him the mile and a half uphill whole. 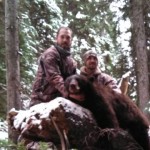 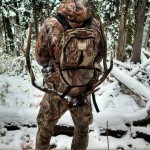 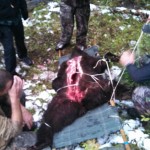 Congratulations on your first bear, Jeramiah, and with your bow, nonetheless!  Pretty neat that you got a nice elk rack out of the ordeal, too.