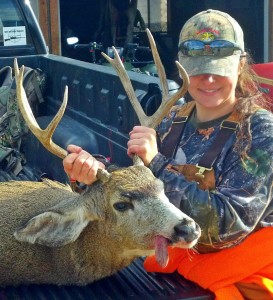 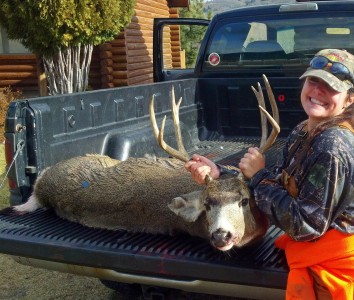 There he was…a nice (to me) 4×4 muley buck cruising along the base of the mountain looming in front of us.  My awesome hunting buddies, Aarron and Matt Watrous, were ready to watch me shoot my dream buck.  Aarron had actually guided me to my whitetail last year (click here for that story), so he knew how insanely excited I get, and I am pretty sure he was already laughing to himself before I even saw the buck through my scope.

But, there he was.  I had been obsessed with mule deer for so long, for so many reasons, and here he was..probably no more than 250 yards in front of me.  My dilemma from earlier had been being unsure of which rifle I was going to use, and I am glad I decided on my .280, as that was the very first caliber I used while rifle hunting for the very first time several years prior…so, I was determined to make this happen.

“He’s right there…do you see him?” is what I heard for about the first 5 minutes I was scouring the mountain side through my scope.  I couldn’t find him.  “Do you see him? He’s rubbing his antlers behind that tree,” said Aarron.  I had NO clue where he was!  I just outright could not see him since the buck moved up the mountain a bit.  “He’s broadside–you have your shot,” said Matt.  Slightly embarrassed that I couldn’t see this buck that was apparently in plain sight, all I could say is “where on earth are you guys looking?”. 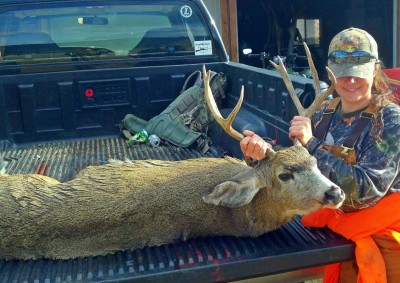 A few more minutes of that, and I caught movement through my scope.  “Oh my gosh, oh my gosh,” is all I could whisper.  That’s when the shaking began.  I get so excited, that I shake uncontrollably…apparently.  It doesn’t happen for everybody, but it is a rush like no other, and it’s kind of annoying when I’m trying to steady my scope, and I literally have no control over the movement I’m making.  But, I watched him for another good five minutes while he wandered behind trees with his nose down, following does along the steep terrain.

Finally, he stopped broadside, and I managed to steady my rifle enough to aim and take a shot.  I was shaking so badly, but I hit him.  Unfortunately, it was a low shot and got him just below his shoulder.  I had to take another shot.  At this point, he was approximately 300 yards away or so, but as he stood up, again, I took that second shot, and down he went.  I wasn’t too thrilled at the fact that it took two shots for me to get him, either.  But, I was uncontrollably pinging and was borderline freaking out (in a good way) from the adrenaline rush, but I got him.  To be sure I got him good, we snuck half way up the mountain, and, sure enough, he was down.  I was pretty sure my heart was beating so hard that it was about to pump out of my chest and that my face would fall off from smiling so big.

Then, I de-virginized an awesome buck knife that was a gift from Coral and Randy Maxwell last year, and gutted my first mule deer with it.  Aarron was an awesome teacher, and it made me laugh at how funny I must have looked to both Matt and Aarron with the knife in my hand, still shaking, and blood up to my elbow and covering my pants–still smiling.

It was a day I will never forget…well, technically, a morning I will never forget.  Aarron had said “we will find you a buck”, and by golly, we found a decent one, for sure!  A huge thank you to those two for putting up with me before, during and after a phenomenal day.  This was definitely one of the best hunts I have had, and I am stoked to fill up the freezer.  I will be doing a head mount on this beauty.

Oh, and one of my favorite parts was actually going through the “WITH GAME” side of the hunting check station just outside of Darby.  That was a first for me, and of course that was a photo-worthy moment.  A day later, I’m still smiling, but the shaking has subsided. 😀

It’s YOUR turn to submit your story to MontanaOutdoor.com!

Special thanks to Aarron and Matt Watrous for the awesome hunting day!! 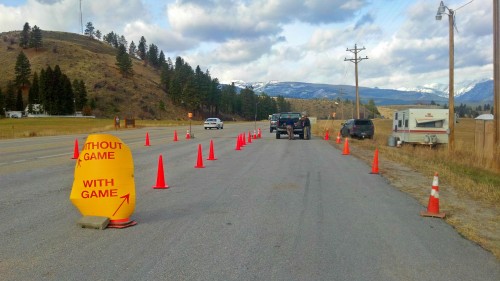