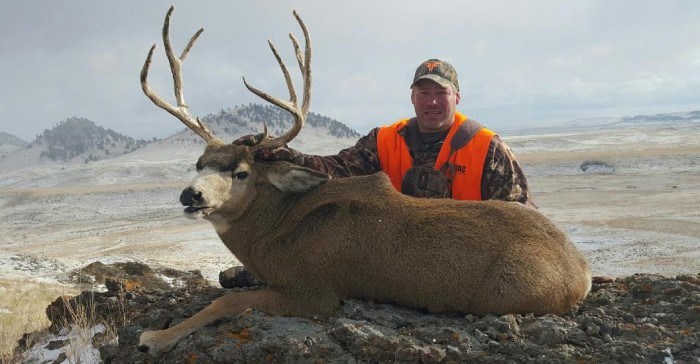 You might remember Darren Newsom from last year when he was requesting assistance from landowners to fill the Governor’s tag for mule deer in the state of Montana (click here)–well, this year Darren was after the same caliber muley with a general tag.

For those of you who may not know who Darren Newsom is, here’s some background on him…  Newsom is the owner of Ammo & More in Stevensville and is an avid hunter–and so are his daughters.  As a matter of fact, Newsom’s two oldest daughters co-star in hunting shows with him regularly and Sheridan, at 20 years-old, is the youngest female to complete her Super 10 and second youngest to get her Sheep Grand Slam.   It turns out Darren’s hunting and shooting genes were passed on to his girls.  Good work, Dad!

Newsom is one of the Mule Deer Foundation’s largest donors (awesome) and is passionate about supporting conservation through hunting.  He has a variety of mounts from several different species of animals, video footage of hunts, photos and stories to show for all of the time and effort he has invested in hunting over the years.  Although his all-time favorite animal to hunt is elk, he loves a good mule deer hunt–and this year’s harvest proved to be nothing short of good…and interesting.

It all started when Darren and his friend headed out hunting in Montana.  They were on a mission to fill their tags with memorable muleys…and a memorable muley is exactly what Darren found.

They headed out and braved the elements, as the wind blew (gusting upwards of 60-70 mph) and the snow flew…but, they were not about to let Mother Nature deter them.

By day three, they had passed up a few very nice trophy mule deer, but both of them were holding out for that one buck that just “does it”–the one where you can feel it in your veins–and neither one of them had found that yet, so the search continued. 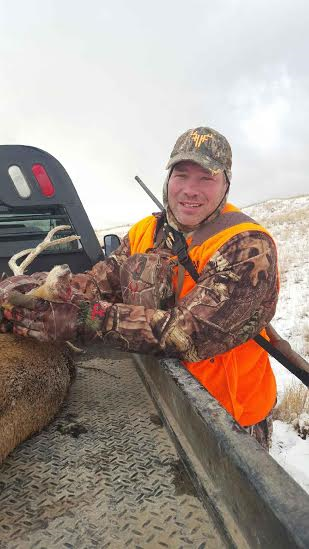 Late Friday morning, Newsom spotted a 4×5 buck that was limping.  After getting a better look at him, it was clear he was not doing too well.  The buck had a “club foot” from a previous unknown injury that was preventing him from moving around normally and obviously comfortably.  In an area crawling with coyotes, there was no question in Darren’s mind that this buck was not going to last long out there.

Newsom had been hopeful he would find “the one” trophy muley that just got his blood flowing, as we all are when we are out hunting, but being a compassionate and ethical hunter, he does not like to see any animal suffer.  Rather than turning a blind eye to the situation and allowing this buck to face a fate that would be less than desirable to say the least, Darren chose to put him out of his misery.  He dropped the buck with one shot and tagged him–a management buck.

This muley was not the buck Newsom thought he was holding out for, but he has no regrets with his decision and would do it again if he was confronted with the same situation down the road.  “To be honest, this buck got my blood going, as I knew it was meant for me to kill him,” said Darren.

This buck most likely would not have made it through the winter and would have surely suffered.  Everybody likes a good trophy buck, but it is good to see hunters in the field proceed with the animal’s best interest in mind over the size of the antlers.

At the risk of coming across as cheesy, there is so much negativity out there in the news lately, I am happy to post positive articles such as this and other success stories–especially involving hunting.

Excellent work, Darren.  Congratulations and thank you for all you do for sportsmen and our wildlife!