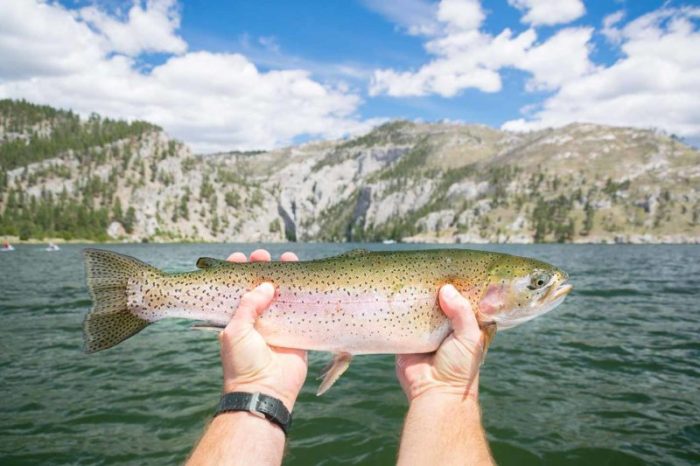 Canyon Ferry:  Cold weather kept most anglers off the water, but those that got out found good rainbow fishing throughout the reservoir.  Shore anglers are catching rainbows while using nightcrawlers and marshmallows around Pond 4, north of the Silos, the Outhouse and Shannon.  Boat anglers are having success around White Earth, Goose Bay and Cemetary Island while trolling crankbaits or cowbells.  A few walleye are being caught on bottom bouncers and worms or jigs from White Earth to Hellgate in 25 to 40 feet of water.  A few walleye and perch are being caught from shore at White Earth and Pond 4 on worms.   Troy Humphrey, FWP, Helena

Hauser:  The weekend was very cold and not many anglers were out fishing but rainbow action has been great lately and shore anglers are picking up good numbers of fish at the Causeway Bridge and Riverside below Canyon Ferry Dam. Night crawlers and power bait have been catching most. Anglers trolling various crankbaits around York Bridge and Devil’s Elbow are finding some nice rainbows. Most walleye anglers are pitching jigs in 10-15 feet of water around Black Sandy/White Sandy. Anglers are also finding some walleye during the late evenings at the Causeway Bridge. Floating jigs and leeches/crawlers are working well. White, pink and orange have been popular color combos.   Chris Hurley, FWP, Helena

Holter:  The weekend was very cold and not many anglers were out fishing but rainbows action has been great lately. Most fish are being picked up on the lower end of the reservoir from Split Rock to Black Beach and Juniper Bay. Boat anglers trolling dark colored crankbaits have been doing well and some are finding fish while trolling cowbells tipped with crawlers. Rainbow anglers are also picking up some nice fish from shore at Departure Point and Lake Lodge with crawlers and power bait. Perch action has slowed down but a few are still being found while pitching jigs around Cottonwood Creek Bay. White, pink and orange have been popular color combos.   Chris Hurley, FWP, Helena