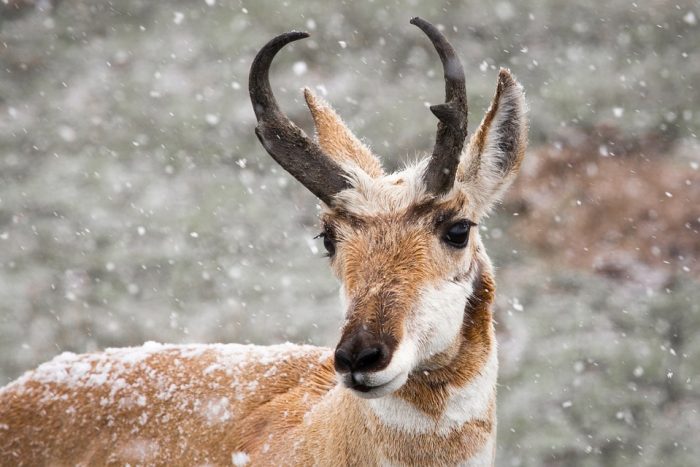 MILES CITY – Saturday, Oct. 10, marked the rifle season opener for antelope and the opener for pheasants. Check stations operating around southeastern Montana on Sunday saw a lot of hunter traffic.

Antelope openers in this region often coincide with big storms. That didn’t happen, but conditions were still unusual. Saturday brought unseasonably hot temperatures, and Sunday saw extremely high winds. However, that didn’t keep the hunters away or ruin their prospects.

“Even with the temperatures in the high 80s on Saturday and wind gusts over 40 miles per hour on Sunday, the harvest success rate was close to the 10-year average,” said FWP Wildlife Biologist Steve Atwood.

“My observations from visiting with folks in the field Saturday, and then at the check station Sunday, was that it was busy,” Atwood said. “All or nearly all public access points had antelope hunters, but most hunters reported seeing antelope during their hunt. Hunters from the southeast corner (Hunting Districts 704/705) reported seeing more antelope than hunters that focused on the northern portion (HD 700 and 701).”

That reflects biologists’ observations that antelope populations are faring better in the southern half of the region than elsewhere, where they have been slower to recover from previous harsh winters and other factors.

“It was very busy this weekend in the Broadus area,” said Wildlife Biologist Ryan DeVore. “The hunting conditions were tough, primarily due to the high winds. Despite quite a few hunters and the winds, most folks enjoyed their time afield, and many were successful or at least had opportunities.”

Most people were after antelope, with 156 hunters in 73 parties visiting the station. Their success rate was 49 percent. In total, 86 antelope were harvested, with 54 bucks and 32 does.

Mosby’s check station in Garfield County was busy throughout the day, according to Wildlife Biologist Emily Mitchell.

“The weather for opening weekend was a bit crazy, with an 80-degree high on Saturday and 25- to 30-mile per hour winds, with gusts up to 60 miles per hour on Sunday,” Mitchell said. “Many hunters called it a weekend early on Sunday but were still happy with their hunt, and many were going home with a cooler full of meat.”

Antelope hunters experienced an 87 percent success rate, bagging 60 bucks and 20 does. Those numbers are slightly below 2019 totals, but Mitchell noted that weather brings many variables from year to year.

“Hunters did report seeing lots of other hunters out in the field, but still had a good hunt and good success,” she said.

“While there were fewer hunters, opening day is always busy,” Mitchell said. “In those situations, it’s often productive to walk into areas away from busy travel routes.”

“Hunters coming to Region 7 should remember that antelope numbers are significantly higher in the southeastern corner of the region, towards Broadus and Alzada, and Hunting Districts 704 and 705 are the only districts where the new 799-30 tags are valid,” she said.

In order to take advantage of better populations in the southern portion of Region 7, a new opportunity is the 799-30 doe/fawn license, which is valid only in HDs 704 and 705. It is a second opportunity license that is available only to those hunters who drew a 007-20 and/or 007-30 antelope license (which are valid in all of Region 7). The 799-30 license is available one per hunter. Hunters may hold up to three antelope licenses in a given year, only one of which may be an either-sex license.