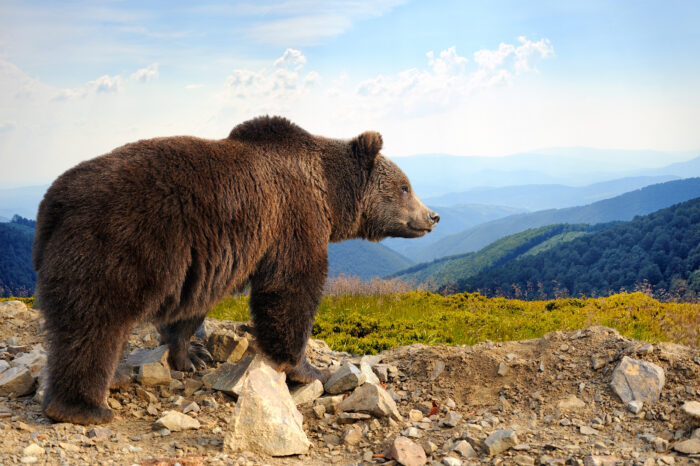 Bear With Me For Bear Safety
By Krawdaddy Jones

Spring is on the horizon, officially estimated to start on March 20th! For more on the weather predicted for the winter season, check out my article La Niña and Montana Winter. If you’re a real outdoorsman, you already know that with Spring comes Bear season. Bears begin to wake up from their winters-long slumber, and they wake up hungry! Black bears can hibernate for up to seven and a half months. Grizzly bears (the big fellas)  typically hibernate between five to seven months. Alaskan Brown Bears can hibernate from five to eight months. As soon as the snow starts melting, it’s safe to say you should be on your toes when it comes to our ferocious, fuzzy friends. Here’s a few bear safety tips to make sure you’re minding your P’s and Q’s as these treasured beasts crawl hungry back into the world.

BEARS CAN WAKE UP INSTANTLY FROM HIBERNATION 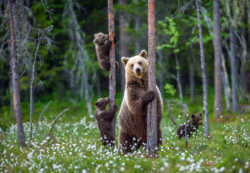 Even though they’re in hibernation right now, doesn’t mean they can’t wake up instantly from their deep slumber. Bears are actually one of the only hibernating animals that can do this. While exploring the wilderness, remember that you could stumble upon a bear sleeping. Be extra cautious, especially around dens. Typically dens are dug out by the bears as shelter from the harsh winter weather. While exploring, just be cognisant of disturbing or encountering a bear near its den.

Being cautious about where you’re treading and your surroundings is the first preventative measure you can take. The second is of course, keep your garbage contained. Bears are already hungry from hibernating, so seal all of your food waste and trash in containers that can’t be opened by their massive claws. Here’s a bear safe container to check out. When picking a trail to hike, or a place to camp, look for signs of a bear. If you see bear poop, grizzly diggings, or dead animal carcasses about, turn around and look for a safer spot. Claw marks on a tree, or bear tracks, likely mean this is a bear’s territory.

As you might imagine, they’re not the best at sharing. Also, keep bear spray on hand in your tent, just in case worse comes to worse.

So, you do happen to encounter an angry, hungry bear. The first step is to pick up any small children or animals you have with you, if any. Then you’ll want to speak to the bear calmly, as this helps the bear recognize you as human and not prey. If the bear stands up, that typically means it’s just curious and not threatening. If you can, make yourself as large as possible. 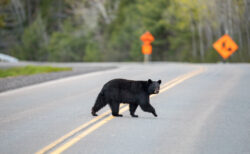 Standing on higher ground will help, and traveling with a group of people is even better. This was the smell and size of your human posse is likely to deter the bear. Once you’ve gotten the bear stationary, step sideways to safety. Stepping sideways is non-threatening to the bear, and ensures that you can keep an eye on it and won’t trip. Make sure the bear always has an escape route, and if you’re being followed remain stationary until the bear is stationary again. DO NOT RUN, bears are similar to dogs in their instinct to chase a fleeing animal, and I promise you are not faster than a bear.

Well, this is the worst case scenario. It varies from bear to bear, depending on the breed. Grizzlies are going to want to flip you over, and if they’re attacking you to eat you, they want you alive. So, it’s best to play dead, spread out on your tummy with your hands caged behind your head. Spread your legs out, so it’s hard to flip you over. If the attack persists and becomes unbearable (no pun intended), you should fight back. Hit the bear with anything at hand on the face and muzzle. If you have bear spray, try to use it without blinding yourself in the process. With blackbears, it’s the opposite. Try to get to safety as soon as possible, and DO NOT play dead. If the bear approaches you, hit it as hard as you can in the face and muzzle. Then get to a car or a building where you can wait or make an escape.

These are just a few tips that will help you stay safe during the spring season, as the bears begin to awaken. Thank you to the National Park Service and Yellowstone Bear World for beefing up my info on the subject. Stay safe this spring and happy hiking!!