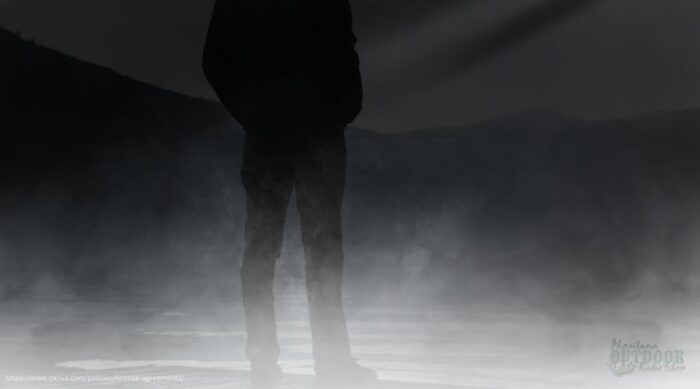 Creepy “Strangers in the Fog” while fishing
By angelamontana

If you missed our first creepy fishing story, posted to celebrate Halloween, you can check it out here.

Now, we are moving on to our next story by “Mike The Truth” called Strangers in the Fog via onthewater.com.  Many stories involve fog, for obvious reasons, so check this out:

Strangers in the Fog

From “Mike The Truth”

I peered out my window that October night. The fog had settled over Eastern Long Island, and I could barely see past the window itself. Although I hesitated I still did not let the “soup” deter me from wading into Moriches Bay and fishing that night.

Driving to the Coast Guard station was slow and hazardous. Visibility was zero.

The night was still and the lack of any visible moon lost in the fog gave it a darker than black feel. That coupled with the fact I could not see my outstretched hand began to unsettle me and get my mind to wandering.

I shook the tragedy from my mind as I entered the dark swirling water. Ever so slowly I waded out to chest level and proceeded the hundred yards to my spot.

As I arrived I prepared to fire off my first cast when I turned to my right coming face to face with a man no more that three feet away. We looked at each other and screamed simultaneously. They must have heard us for miles. When we regained our composure we had a good laugh. After we introduced ourselves we began to fish. I asked him what he thought of the fog. “I actually enjoy it quite a bit,” he said. I then asked him if he was from the area. When he didn’t reply I turned toward him. But he was no longer there. I fled the water that night. And I never fished there again.