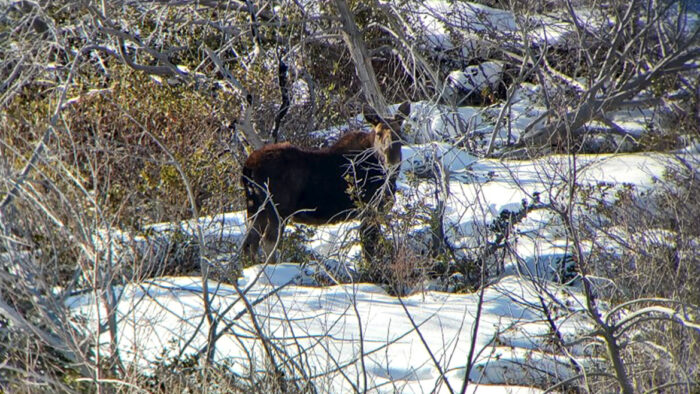 A woman was injured in her own driveway after a moose attacked her a week-and-a-half ago.  Here is the press release by Idaho Fish and Game:

Fish and Game is thankful that the woman’s injuries were not life threatening.

On the evening of January 13, 2023, a resident of Ketchum received substantial injuries in her driveway area after a moose attack. The incident was preceded by an encounter between an unleashed small dog and the moose. When the homeowner attempted to intervene, the moose, which was approximately 20 feet away, charged the woman. The moose ran at the woman, hitting her in the head which reportedly knocked her unconscious for a brief time. It is unknown what happened immediately after the contact, but her injuries are consistent with a moose continuing the attack while the woman was on the ground.

While the attack occurred on Friday evening the incident was not reported to Idaho Fish and Game until Tuesday morning, January 17, 2023.

Timely reporting of attacks by aggressive moose or any other wildlife to Fish and Game is critically important. Having conservation officers and biologists responding immediately to an attack or aggressive wildlife incident, greatly increases our ability to safely provide a service of protecting the public from additional wildlife incidents.

Attacks should be reported immediately by calling 911.

If a moose displays signs of aggression towards people or pets please call the Magic Valley Regional Office at (208) 324-4359 during normal business hours. After hours reports can be made to Blaine County Dispatch non-emergency line at (208) 788-5555.

Regional staff are attempting to locate and relocate the moose to a more remote location. The challenge is that multiple moose have been reported in the Warm Springs neighborhood west of Ketchum.

Residents who live in areas where moose are common are strongly encouraged to be vigilant when they see a moose nearby. While moose may give the appearance of being slow and plodding, they can react incredibly fast when provoked, and cover distances in a matter of seconds.

If a person encounters a moose, they should closely watch the behavior of the moose, looking for signs of agitation or stress. If a moose lays its ears back or the hair on the back of the neck raises, that means it is stressed and could charge at any time. Moose will often snort or grunt or stomp their hooves when stressed or feeling threatened. If you see any of these behaviors the best course of action is to put something between you and the moose – like a tree or a vehicle, or, if it can be done safely, enter your house or vehicle.

Residents are strongly encouraged to keep these safety measures in mind when around moose:

In winter, moose can become stressed due to extreme cold and deep snow while their food supplies are scarce, and their fat reserves are being depleted. Minimizing disturbances during the winter is critical to reduce stress to moose and other big game animals.

For more information about how to live safely with wildlife contact the Magic Valley Region at (208) 324-4359 or visit the Wood River Valley Wildlife Smart Communities website.