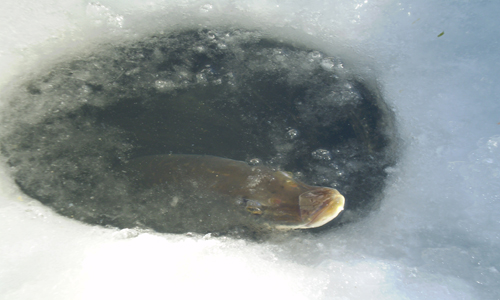 2010 Pike On Ice might be the last
By Hookemharry

The 2010 Pike On Ice Fishing Derby last weekend was the most successful tournament in its brief existence, but according to its organizer, this is likely going to be the last year for the derby on Seeley and Swan Lake. It is going to be Bedard’s last year.

“We had a great turnout for the sixth year of the tournament, but this will be the last year for me anyway,” said Toby Bedard, the tourney founder and organizer. There are a number of reasons that Bedard is giving up on doing the non-profit derby, but it’s not for a lack of interest from local anglers.

“We had 109 anglers participate this year that beat the record of 102 contestants a couple of years ago,” Bedard said. “It is just way much for one man to handle and it’s unfortunate because the anglers raise needed money for local charities with their involvement.”

This year’s tourney will add over $1,000 in the local Seeley Lake food bank coffers. But at the end of the day, the support from the business community and other organizations just wasn’t enough to help keep the tourney alive. “We went into this year with no sponsorship money and without that funding it makes it a little more difficult to underwrite costs,” said Bedard.

This year, Pike on Ice didn’t see any monster pike brought in with the biggest at 11 pounds, 3 ounces, caught by Dave Klein of Florence on Saturday. On Sunday, the largest pike was brought in by Ralph Flockerzi of Missoula. It weighed 8 pounds, 7 ounces.

Dave Bordner of Missoula entered a total weight of 32 pounds, 7 ounces for the two-day tournament to win the first place prize of $500. Flockerzi, who won last year’s derby, came in second with a catch of 29 pounds, 9 ounces. Third place went to Tom Farago of Missoula with 28 pounds, 10 ounces. Farago barely edge out his son Mike who entered 26 pounds, 3.5 ounces to capture fourth.

“The weather was overcast and rainy most of Saturday but cleared up a little on Sunday , but the best part of the two days was that the temperature was in the 30’s and not below zero like it has been during past events,” reported Bedard.

There are two methods of going after the pike. One is using tip-ups and smelt. The other is spearing the pike in a spear hut. Successful tournament contestants seemed to be split on which method they used to harvest their northern pike.

This is Bedard’s last year of organizing the derby so if anyone else or a local non-profit organization would like to look into continuing the event, Bedard would appreciate a call and fill you in on what needs to be done. “I will give them all the ins and outs of putting the derby on,” he said. “It is a good event and when the anglers turn out, it raises a decent amount of cash for us to donate to a local worthy cause like the local food bank in Seeley Lake”.